I Love Sushi, I Hate Overfishing

I am a huge fan of seafood and sushi; although the latter only became a favourite cuisine of mine in my twenties.

I was brought up near the coast in Cape Town where my family and I would often have fresh fish, prawns, perlemoen, muscles and crayfish for dinner (obviously, not all in the same sitting, but spread out across the week).

I have fond childhood memories of going to pick black mussels off the rocks during low tide, and digging for white mussels in the water white-wash.

We would either boil them for lunch, which we would serve with garlic butter and fresh bread; or have them as a starter before tucking into a delicious yellow tale tuna.

Living in London now I seldom get the chance to eat fresh fish in the same way that I could back in South Africa.

Instead I get my sushi fix at least once a week from my local Japanese restaurant and often buy line-caught pink tuna which is sold for two a penny in the supermarkets.

I have always been environmentally conscious and with a science background had taken an interest in the oceans during my studies.

I had read many accounts which suggested that we were decimating our ocean life to satiate our diets, but for some reason – call it denial or naivety – I didn’t take action or change my behaviour in any way.

In fact, I flat ignored this issue, assuming that there was very little I could do as an individual.

I think this is the reason why most people actually do nothing, even when faced with compelling facts and persuasive arguments – we just feel powerless as individuals against what seems like insurmountable institutional inertia.

This feeling of powerlessness is probably one of the reasons why so many awful things continue to pervade our society (even in the 21st century). 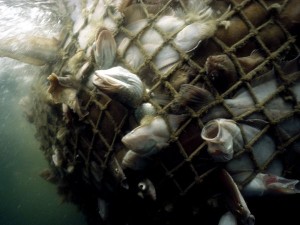 Nonetheless, I digress. My blasé relationship with eating fish was recently questioned when two events happened to me – one personal and the other contextual.

I went back home to South Africa earlier this year for a holiday after a long 3 year hiatus. The one thing I was looking forward to (apart from Sun which is something that is seriously lacking in the UK) was having fresh fish cooked unpretentiously on an open flame.

This turned out to be no problem – there was loads of fresh fish to choose from at our local fish market. But when I suggested that we go dig for white mussels to complement our meal I was told that there were no more.

Initially, I was slightly confused and thought that perhaps it was the wrong season for white mussels, but the more I probed the more I realised the shocking reality.

Our small coastal community had in the last 15 years expanded fairly rapidly. The influx of people had led to increased numbers of people digging for white mussels during the evening (this is the best time to catch them).

The continued demand for this tasty treat had completely decimated the mussel population so that none can be found in this area today. I couldn’t believe it. I can literally remember when the sea bed was teeming with these little shelled creatures.

Now I’m not trying to get all soppy on you, but this experience really brought it home for me – a small community (of which I was part) had led to the collapse and local extinction of an animal.

I couldn’t believe that it had happened so rapidly and completely under the radar – no one even saw it coming.

The next day I went back to my childhood beach to see if I could find any mussels. I seriously thought I would find at least one or two (bear in mind we used to pull out 50-60 mussels in a matter of 10-20 minutes). I dug for over an hour and did not find one mussel.

The second event happened shortly after this personal experience.

When I got back to London a couple of weeks later, sun-tanned and refreshed with Omega 3 fish oils, I was pleasantly surprised to find a DVD documentary attached as a promotional gift to my Sunday Times newspaper.

The DVD was called ‘End of the Line‘ and promised to be “a gripping, sobering documentary for anyone who loves fish, the ocean–and the health of the earth’s entire ecosystem”.

I thought it funny and coincidental that I should receive such a DVD after recently being made aware of the damage my home community had done to a local seafood species. Alas, the world works in funny ways.

I slipped the DVD into the player and sat down with some fish fingers and tartar sauce (sick joke, but I want to keep you reading) to see what the documentary had on offer.

The film is directed by Rupert Murray and based on Charles Clover’s book The End of the Line: How Overfishing Is Changing the World and What We Eat.

Narrated by Ted Danson it tells the harsh reality of how we are fast emptying our oceans. Employing both local and global stories of declining fish populations, including the imminent extinction of the bluefin tuna, the documentary illuminates how our modern fishing capacities far outstrip the survival abilities of any ocean species.

I realised that so much is told about the impacts of our actions on terrestrial fauna and flora that we have overlooked a potentially much larger and untold story of how we are destroying ocean life.

So after watching the DVD and being quite literally shocked, I started doing some further research. Here are some of the shocking facts that I uncovered.

Using nearly 50 years of data collected by the United Nations, a team of scientists has catalogued how in one ocean after another fishing fleets have first caught the big, valuable stocks, then worked their way down the food web, catching more and more of the smaller species.

The scientists predict that at the current rate of fishing, many fish stocks could be eliminated within 25 years. In the last decade, in the north Atlantic region, commercial fish populations of cod, hake, haddock and flounder have fallen by as much as 95%

Bycatch is the technical term for fish and other species (turtle etc.) that are caught during the process of fishing but are unwanted.

For every one tonne of prawns caught, three tonnes of other fish are killed and thrown away. 20,000 porpoises die each year in the nets of salmon fishermen in the Atlantic and Pacific Oceans and hundreds of thousands of marine creatures are killed each year by tuna fishermen.

The Fish Don’t Stand A Chance

As noted by Greenpeace, the fish don’t stand a chance against the modern technologies deployed on commercial fishing boats. The industry is characterised by giant ships which use state-of-the-art fish-finding sonar to pinpoint schools of fish quickly and accurately.

“These ships are fitted out like giant floating factories – containing fish processing and packing plants, huge freezing systems, and powerful engines to drag enormous fishing gear through the ocean.”

While fish farming adds to the world’s fish supply, in some intensive aquaculture systems the weight of fishmeal inputs is greater than the weight of farmed fish produced.

Producing some carnivorous fish, like salmon, requires amounts of fishmeal between 2.5 and 5 times the amount of fish produced. For tuna raised on ranches, the weight of wild fish used is about 20 times the weight of tuna produced (source: daily science)

End of the Line (Trailer)

Ted Danson on the End of the Line

From an international and national perspective, key actions can be taken to turn around this dire state of affairs.

For example, internationally agreed quotas (some of which are already in place) should be formulated based on clear scientific estimates.

Fishing seasons should be shortened and restricted during key periods (such as during breeding times).

Enforcement at sea is incredibly difficult; however, a key action would be to make sure that all major vessels have a independent third party auditor on board at all times.

In addition, it is critical that the industry invests resources into the development of better, safer and more efficient equipment that reduces the unnecessary waste of bycatch.

From a personal perspective, I remain a huge fan of seafood and thus I’m unlikely to stop eating fish anytime soon.

However, the hypocrisy of continuing to eat fish whilst in the knowledge of the global overfishing crisis is something that I can’t reconcile without taking some form of action.

If you feel the same, here are some things you can do to make a difference:

The Marine Stewardship Council’s website shows you which fish are sustainably caught and highlights which products have their stamp of approval.

Even better, download the Seafood Watch App for Android and iPhone and get up-to-date recommendations for ocean friendly seafood and sushi

The Good Fish Guide is a brilliant, user-friendly resource on what fish to eat and which to avoid

When buying tuna have a look at Greenpeace’s ranking of leading retailers in terms of sourcing and stocking sustainable tuna.

Look for dolphin safe tinned tuna rather than only dolphin friendly. The dolphin safe label awarded by the Earth Island Institute has the strictest monitoring system of fishing methods with an independent observer on board vessels over 400 gross tons.

Get active and have a say. Here are some great initiatives that you could add your voice too (if we can get enough people shouting then something will get done)

End of the Line Campaign

Thanks Mark!! You just ROCKED my day

I’m glad that I could be of assistance.