The Benefits Of Community-Based Resource Management 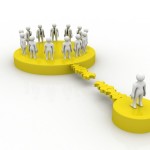 It’s a well known fact that for individuals to invest their efforts in a cause, they must feel some sense of ownership. Without a feeling of personal responsibility and attachment to the outcomes, people will struggle to invest time and energy. This is one of the reasons that top-down management, that which excludes employees or beneficiaries from decision-making processes, can fail to bring about behaviour change. Whilst there is a place for top-down management, it is increasingly frowned upon in favour of more inclusive, bottom-up approaches. To garner support for a shift in the orchestration of a company or the management of resources, ownership is key. (image: freedigitalphotos.net)

Resource conservation has pursued an infamously exclusionary form of management. This is especially the case in the developing world where communities have systematically been excluded both indirectly and directly. Whilst in certain cases this may have some value in conservation terms, it has generally had the opposite effect. Excluded populations tend to harbour feelings of resentment as well as experiencing direct losses to their livelihoods. In the case of the Bwindi Impenetrable National Park in Uganda, physical exclusion of the forest-dwelling community resulted in an increase in illegal poaching. Thus, the negative impact of the community on the forest increased after their forced removal.

An inclusionary management approach would have established an understanding between the two parties as to what was necessary for a proactive, mutually beneficial conservation plan. There are many benefits to inclusive management; environmental, social and economic. It is more likely to efficiently allocate funds and achieve environmental goals whilst strengthening community confidence, cohesion and building social capital.

The island nation of Fiji is at the forefront in the implementation of community-based management plans in marine conservation. As a largely rural-based subsistence economy heavily dependent on the marine environment, the conservation and management of future fish stocks is vital for the welfare of the nation. Fiji operates under customary marine tenure, a system that makes outside attempts to manage resources largely futile. Hence, the network of existing Locally Managed Marine Areas (LMMAs) are village managed and not formalised in government legislature. They came about during the last decade as communities realised that coastal resources were dwindling.

LMMAs are defined as areas for which a management plan has been drawn up among the implicated villages. They generally take the form of a no -harvest area or time period, based on the traditonal `tabu’ concept. This can mean avoiding certain fisheries to encourage fish breeding, or closing a fishing ground for a length of time to allow fish stocks to replenish. The latter is based on traditional practice during times of stress such as the death of a chief.

The implementation of such a management plan creates a meeting point between community-based management and traditonal practice. This is a stellar example of community pioneered management resulting in higher participation and an overall higher success rate. By driving the process entirely, villagers were empowered to actively seek out results.

This is only one example of the importance of ownership for successful conservation management. There are many more highlighting the same message. This is a a message that organisations can learn a lot from, especially where it comes to shifting towards sustainability. Involving individuals and communities in the entire process is more effective, and certainly more monetarily efficient.

Sustainable Resource Management” is the result of years of exhaustive research by Germany’s Wuppertal Institute. Looking at material flows, industrial and societal metabolism and their implications for the economy, this important new book provides radical perspectives on how the global economy should use natural resources in intelligent ways that maximise well-being without destroying life-supporting ecosystems. Sustainable Resource Management: Global Trends, Visions and Policies

many thanks for this useful helpful information , recently i worked on CRM in my neighbourhood for the 1st time my community apply this idea really it was very successful and effective in social change

Way to go Barween! Glad you are doing your part to help your community and the environment. Great to have you here!