South Africa is a country of rugged beauty. Vibrant thunderstorms crisscross the lands undulating landscape. The sun shines more often than not on this multi-cultural rainbow nation.

From 1994 South Africa has seen an additional 4 million homes connected to the national grid, and with more advances in technical requirement people in the squatter communities now have access to lights and a satellite dish, a most peculiar site when driving through poverty riddled areas.

South Africa, in line with agenda 21 and the IPCC are trying to make a break to become more sustainable. As the powerhouse of Africa, they should be more readily able to take on the cause.

South Africa has grown to develop faster then its African counterparts. A recent study ranked South Africa as number one for its potential as a Solar power producing nation (South Africa scored 66/100 by IHS emerging solar markets report). They have 24% of the worlds best winter sunlight, even exceeding places like Spain and who have very comprehensive solar energy markets.

South Africa’s sustainable socio-economic project presently comes in the form of Solar Water Heaters (SWH), these have become common place sightings in Gauteng’s breeze block townships. The industry in South Africa saw an increase in sales of 400% during the early months of 2008 (during Eskom’s initial load shedding period) and has seen the growth of companies associated to SWH grow from 21 in 2007 to 100 in 2008.

So why is the emerging market just that?

South Africa has set its own renewable energy goals and aims to achieve 8.4GW energy production from renewable sources by 2030. An Integrated Resource Plan has been generated which assesses the potential for renewable energy use in South Africa and what the demand for energy will look like in the future.

South Africa is part of the IRENA African Clean Energy Corridor project. This looks to encourage the growth of renewables on the African continent. As of 2011 the renewable contribution from energy was only 11% with the main energy source being from the carbon intensive burning of wood for fuel. Now is a time for change and legislation is slowly making steps towards supporting the renewable energy market.

The National Energy Regulator of South Africa (NERSA) have recently developed policy and guidelines for a energy feed-in system (REFIT was developed in 2009 for similar reasons). They are now allowing residential and commercial elements to feedback, reverse their meter and potentially get paid for power produced as long as it is under 100kw. This tie-in legislation is a step forward, allowing Solar energy providers such as AM Solar a chance to capitalize on the industrial and commercial markets and make residential solar more attractive to home owners. 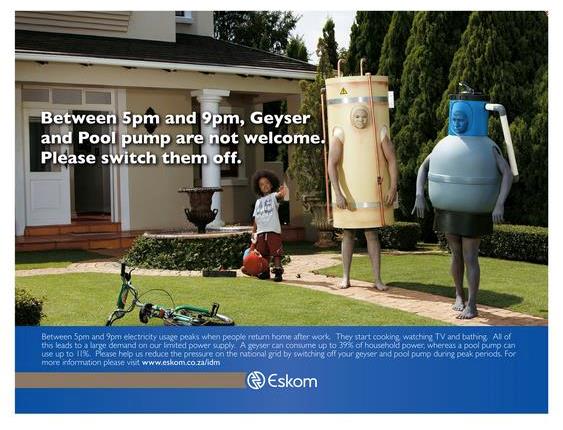 Eskom has launched a Demand Side Management program in a bid to reduce energy demand by at least 10% through behavioral and technical energy measures. Part of this includes financial incentives to encourage people to switch to SWH and adverts stressing when is best to turn off pool pumps and geysers. The market in South Africa is still evolving and as the price falls the industry shall grow. Solar panels are already becoming cheaper! Concentrated solar power is also beginning to see some positive movement to fully commissioned facilities.

Soitec has been tasked with building a 44KWh plant. the facility at Touwsrivier is in its final stages of completion and has reached its production capacity of 50%. The site is expected to be completely online in the coming months with site completion at 60%. This will be the largest plant in South Africa near completion.

South Africa’s solar market is growing and with growth, they will start to see the benefits of this renewable energy!