Straw Houses – Forget What Happened To That Little Pig 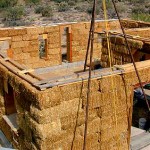 Cheap, visually-pleasing and eco-friendly houses can be constructed from compressed straw bales. Pests find it nigh-on impossible to move in densely-packed bales. Sound absorption is superior. Straw houses provide exceptional insulation from the summer heat and the winter cold, so fuel costs are 85 percent less than usual and there is around 60 percent less CO2. If the floor is made of earth, the thermal mass will maintain a constant interior temperature.

The straw is likely to be locally-sourced. Moisture and decomposition are not problems if the straw is properly sealed. Straw houses are very durable, and some built in the 1800s are still to be found in Nebraska and Europe. They have even withstood earthquakes in California, with many architects and engineers considering straw to be the most seismic-resistant building material. They don’t move in 75mph gales, so the big, bad wolf could do his worst to no avail. Plumbing can run through the floor.

Synthetic building materials can emit low-level toxic fumes known as volatile organic compounds whose effects are amplified if air movement is restricted, resulting in “sick building syndrome.” Straw houses do not have this problem.

When Damien and Amanda Stevens purchased land in Kurrajong, New South Wales, five years ago, they knew bushfires presented the greatest threat. Despite this, after researching what materials to use to construct a home, they decided upon straw because, as Mrs Stevens put it, “I wanted to build organically.”

Mrs Stevens said straw is one of the safest building materials in the event of a fire, safer than double-brick and other possible materials. The couple used compressed straw bales encased in cement render. Being compressed, they don’t contain air, so fire has nothing to feed on – it’s like trying to burn a phone book.

Bohdan Dorniak, an architect who is the treasurer of the Australian Straw Bale Association, stated that straw bale walls have gone untested for bushfire protection since Australian building standards were raised in the wake of bushfires in Victoria in 2009. Before that, they had a reasonably high bushfire protection rating, although if cracks form in the concrete, fire could get into the straw. Canadian and US laboratories have found straw bale and mortar to be “exceptionally resistant to fire.”

Mrs Stevens is well aware of the risk of fire, as the house she lived in with her parents burnt to the ground in 2001 when the occupants were having Christmas lunch. Irrigation pumps and tanks are situated near the Stevens’ home, which the Stevens supplemented with sprinklers all around. Mr Stevens is in the process of bulldozing the surrounding bushland to remove rubble and grass.

In 2008, 52-year-old software engineer, Steve James, constructed a habitable house in Galloway for a mere £4,000, although 10 months of hard labour and some scavenging were required. The shower tray and front window were taken from other people’s unwanted building materials. The house has a timber frame, straw walls encased in lime mortar and a turf roof. The water in James’ “cuddly house” comes from rainfall and the electricity from batteries. He had never previously built a house, although he had partaken of joinery and some other practical work.

Charlie Hague and Megan Williams, each 25-years-old, had been living in a damp caravan for four years before they started work on their straw house. They decided upon this material as it was the only way to put a home of their own within their financial reach. With the assistance of friends and relatives, building took over a year and was completed weeks before their son, Eli, emerged. As with James’ home, the straw bales are rendered in lime. The land on which the house sits, in Glandwr, west Wales, is owned by Hague’s parents.

The cost was no more than USD24,000/GBP15,000/EUR17,700. While no big, bad wolf has been in evidence, it could be the local council that causes the destruction of this house. Because the pair didn’t seek planning permission, an enforcement notice has been issued that will require that the house be pulled down. Don’t forget the planning permission, kids. The council also complained that it was “harmful to the rural character of the locality.” Retrospective planning permission is a possibility. More than 1,400 people have offered support via Facebook.

Plans for straw houses are available online, as is a free course in how to build one.