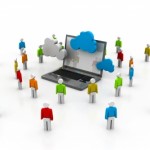 A lot has been said about the migration of enterprises to ‘the cloud’, and a large proportion of this vocalisation has been highly opinionated one way or the other. To name but a few areas of contention: articles and studies regarding security, control and reliability appear on a near daily basis. However, there is a more fundamental and arguably more pressing variable in the cloud debate – the environmental impact it could have if it were adopted in the majority.

Seeking to abstract out the emotive and opinionated elements of the debate, a recent study conducted by the Global E-sustainability Initiative (GEI) examines the impact that the migration could have on the environment. The report – written and led by Peter Thomond Phd, commissioned by Microsoft and directed by Alice Valvadova (of GEI) – found that if 80% of world enterprise adopted cloud computing and powered down local servers we would see around a 4.5 megaton reduction in greenhouse gas emissions based on conservative estimates in the IT sector. Given the current carbon footprint that the IT sector possesses globally, this reduction translates to a 2% decrease in that contribution; a small figure, but it equates to 1.7 million cars disappearing from our roads!

So, how exactly have GEI and Microsoft come up with this figure? Although it has to be based on estimated usage and emissions the methodology of the study is theoretically sound. First of all the study limited its scope to just examining business computing and concerned itself with ‘Email, CRM and Groupware’ when talking about ‘cloud computing’ (although cloud computing can consist of far more than this, this selection is realistically actionable). Then based on the size and online presence of a country, along with the average power consumption of local and public servers, a net emission reduction can be calculated – arriving at our rough estimate of 4.5 Mt. For a more in depth explanation of how figures were estimated and analysed you can find the full report here.

Thomond’s study is commendable because it illustrates that unbiased research into the potential benefits of cloud computing is necessary if businesses are to move forward both technologically and environmentally. Through open and collaborative investigation, the next generation of entrepreneurs can save themselves the logistical nightmare of switching from conventional, locally run solutions to cloud computing – a luxury that the current entrepreneurial generation was not privy to.

Thomond and his team deserve praise for ushering the industry forward by building on previous research and actively encouraging critical analysis of their figures and research methods; as in any field of study, the only way to move forward is to hypothesise, synthesise and critique – constantly improving the information we have available to us.

Moreover, this is incredibly relevant to SMEs and new start-ups due to the fact that, counter intuitively, they are the most inefficient when it comes to on-site service yields. Although it might seem strange to think that a sole trader or a SME of 5-10 employees could be contributing more to the industry’s carbon footprint than a large corporation, it does make sense: one large corporation is running one IT infrastructure that its systems are then built on, whereas an equivalent sized group of SMEs are all running their own servers, NAS systems, databases and so on and this base infrastructure is then being unnecessarily duplicated for each business again and again. This could be avoided if SMEs utilised cloud platform architecture and built their systems on this shared infrastructure instead.

To conclude, what are the reasons why SMEs, start-ups and even larger corporations might not adopt this technology going forward? The report identifies four main areas of concern that could inhibit adoption.

1. Businesses are concerned about data security and loss of control. Although there is little reliable evidence for security and privacy issues, and control is still in the hands of the client business, this behavioural challenge is something vendors must recognise and respond to.

2. Poor marketing and benefit exemplification; although this is beginning to change, there has been a long standing culture of ‘one size fits all’ which simply does not benefit modern SMEs. The service offered needs to be responsive and identify the benefits to the client’s business.

3. A lack of clear and understandable economic benefit. The cloud service vendor not only has to demonstrate the benefit to the client business per se, but also the financial upside as well. For businesses under constrained IT budgets, irrespective of the ecological benefits, the demonstrating of a long term saving still remains the biggest business decision driver.

4. Failing to reach the right people in business. Although a business’ IT department may recognise the benefit of cloud computing, the vendor isn’t doing enough by convincing them. Strategic decision making usually filters from the top down, and so vendors need to tailor their influence to the people making these decisions.

On top of this, I would like to add one more area of concern: a lack of widespread understanding of the fundamentals of cloud computing. If the upper tiers of management and decision making are not fully educated on the potential economic and ecological benefits, then they are not likely to make the initial decision to structure their business with cloud computing in mind. Although some vendors are moving to help businesses make informed choices by educating them, the industry as a whole must make a conscious effort to demystify the offering.

It has been also reported that the development of Internet of Things will lead to the increase of energy efficiency. Results are the most evident in the large enterprises, for instance, malls.

[…] enterprises powered down their local services and adopted cloud computing, there would be a 4.5 megaton reduction in greenhouse gas emissions. This translates to a 2 percent decrease in the IT sector. And although this statistic may not seem […]

We’ve shifted to the cloud solutions recently. It’s easier to maintain and to scale. Environmental sustainability could very profitable.