Entrepreneur and CEO of Sustainable Energy Strategies in Kenya, David Karanja started to design a new concept approach on bioenergy for his home region Nairobi River Basin five years ago. At the time he was concerned about the continued deforestation in this region that is mainly caused by fuel wood demand. Most of its inhabitants rely on fuel wood for cooking, a traditional method causing severe health problems and contributing to high deforestation rates.

In 2010, when I had the chance to meet David in Nairobi, he showed me how much further women collecting fire wood had to walk than in former times when the forest line was still much closer to their homes.

Without access to the electricity grid, there was no possibility to use electric energy for cooking. Energy efficient stoves would not get down to the root of the trouble either, as the fuel wood demand could admittedly be reduced to around 30%, but not to zero.

After doing some in-depth research, the entrepreneur came up with an innovative idea: Why not use the manure of domestic animals for biogas generation?

In Nairobi River Basin, many people possess a couple of cows that live right next to their house, so-called zero grazing cows.

Due to limited available space in this suburban area, there are no pastures, but enclosures on the ground. The cow dung can therefore easily be collected and used for domestic biogas production. The dung of at least two cows or, alternatively six pigs is needed to supply one family with enough household energy for both cooking and lighting. This kind of domestic biogas generation and use has been practiced for more than 30 years in India and Bangladesh, and in some parts of Sub-Saharan Africa, too. For example, in Kenya’s neighbour country Rwanda.

Still, in Nairobi River Basin there were but a few households using biogas for cooking purposes back in 2008.

David Karanja and his team elaborated a business plan, meticulously defining how every single step of the project could become realized in the near future. To mention but a few details: jobless young men would be trained as biogas technicians and experienced Indian experts would be invited to teach them how to build the biogas digesters, while HIV-positive orphan girls could be trained in explaining to the households how to use it.

The households would receive micro-credits enabling the investment, and additional income could be generated by turning the project into a clean development mechanism (CDM) project, selling certified emission reduction certificates on the global CDM market.

Only the up-front financing remained an unsolved problem. For three lengthy years, Karanja went to every single local bank in Nairobi.

Still, none of them was willing to grant a credit, and no micro-credit option was available either. It would not be the first time for a promising business idea to fail because of missing financing.

Luckily, the insistent entrepreneur decided to stay on the ball and contacted the German NGO atmosfair, specialized in CDM project activities in developing countries. Once atmosfair agreed to support the project and initial funding was secured, the local banks in Kenya miraculously opened their doors to credits and related micro-credits. 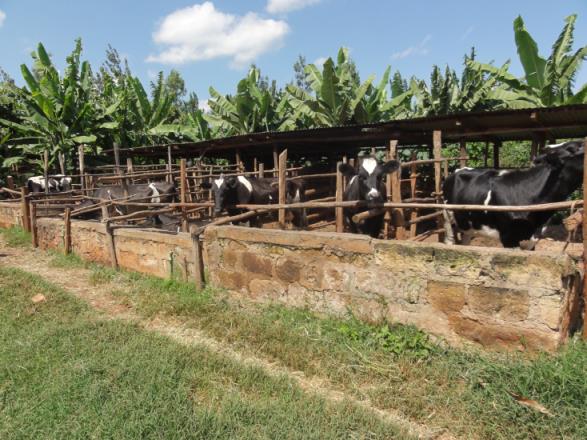 A zero grazing unit: cows eat and rest in the unit. They never move out… 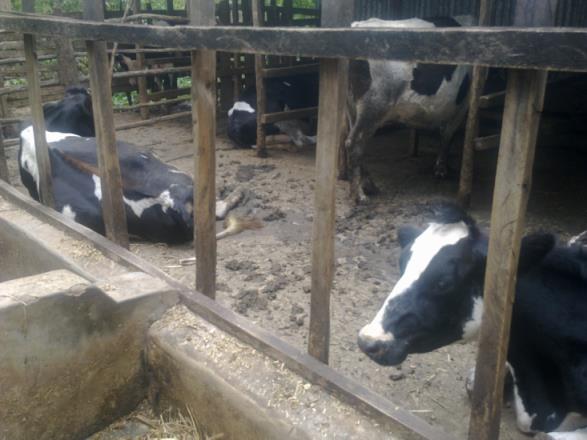 …because of the size of the land, cows are usually never many…. 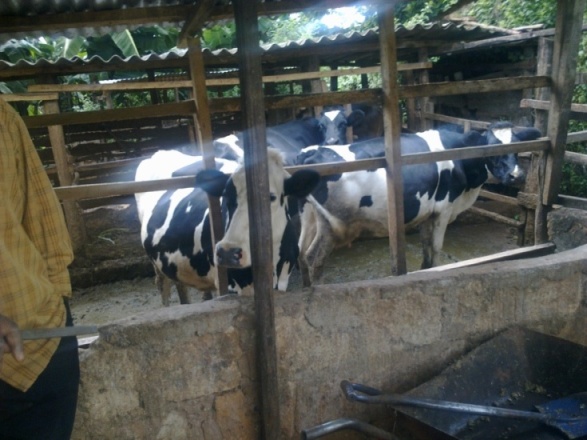 In 2010, the Indian biogas expert crew flew into Kenya and gave instructions to the recruited young men on how to build the biogas digesters. As of today, more than 350 households in Nairobi River Basin happily cook their meals with biogas generated from zero grazing cows, while many more are lined up to be next.

The biogas activities have revolutionized both the rural kitchen and the garden through economically exploiting the organic fertilizer value of biogas slurry by growing food organically in the garden. The rural women have been the greatest beneficiaries as their lives revolve around the kitchen and the garden: They now have both energy and food security from biogas technology.

What are the lessons learnt? What actually helped most in implementing this business case? According to the CEO, it was “the support by atmosfair, a grant from the German Federal Environment Ministry and iron determination”.

His advice for other entrepreneurs: “#1 Take sustainable energy and development to the rural women, they benefit most and are best placed for its uptake and dissemination. #2 Use innovative approaches in harnessing the abundant supply of locally available resources.”

The UN initiative Sustainable Energy for All aims at providing access to energy, raising the share of renewable energy and increasing energy efficiency. Currently, 1.3 billion people worldwide lack access to electricity. Sub-Saharan Africa has the lowest electrification rate in the world with an estimated 70% of the population living without electricity. Energy is the prerequisite for developing economic activities and therefore possesses the power to pave the way out of the poverty trap for millions of people. According to the UN initiative SE4ALL, private-sector engagement is key to building and serving new markets in developing countries.

Its a very good idea I would like to know more about it . Also I want it at home .thanks nice work.