The history of human interaction with the whale has been one marked by a seemingly irreconcilable tension between adulation of, and even awe for, these “monarchs of the deep” and the counterpoised desire to commercially exploit cetacean species for economic gain.

The recent reports of one Icelanders whaling activities brings these ongoing tensions into the present domain.

An Icelandic whaling tycoon has caused outrage amongst environmentalists after boasting to a British newspaper that he has been powering his fleet of whaling ships with a biofuel composed of 80% diesel- and 20% whale oil.

Kristján Loftsson, chief executive at the Icelandic whaling company Hvalur, calls his mixture of fin whale oil a “green biofuel” and claims it to be a more environmentally friendly alternative to traditional sources of fuel. Loftsson melts down the blubber from slaughtered fin whales to create a blend of diesel fuel and whale oil. This mixture is then used to power the boats that kill even more fin whales. Loftsson claims that this process is additionally friendly to the environment as the fat from the fin whale carcasses is rendered into oil using renewable geothermal heat sourced from Iceland’s volcanic vents. According to the Times, Loftsson calls this the world’s “greenest” marine biofuel.

However there is nothing environmentally sound about using the oil of an endangered species to fuel the killing of even more of its species. Each one of Loftsson’s vessels use the oil equivalent of one fin whale for every day trip it makes, making this obscene fuel source even more unsustainable. Chris Butler-Shroud, chief executive of Whale and Dolphin Conservation commented on the recent report as “a completely absurd, perverse and unethical movement by an industry that is already steeped in the blood of whales to keep its own vessels afloat”. 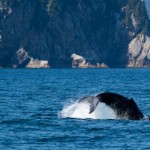 Unsurprisingly, whale activists were sickened by Loftsson’s attempt to make his company seem environmentally respectful and many have dubbed his actions as being tactful greenwashing – a deceptive marketing strategy that aims to promote the perception that an organization’s policies are environmentally friendly in order to manipulate public opinions and increase profits.

The International Whaling Commission (IWC) issued a moratorium on the hunting of fin whales but Iceland has ignored the ban, taking in 148 whales in 2010. With only 110,000 fin whales left worldwide and whalers such as Loftsson continuing this practice in outrageously unsustainable ways, it begs the question: Is the IWC really doing enough to enforce such regulations?

The debate of whaling is an incredibly broad church and one that is riven with conflict. The policies behind whaling have been a primary example of the difficulties involved in the global management of the commons. Having been viewed as a common property resource by regime theorists, the essential economic problem has been that everyone has an incentive to conserve the commons together, but an incentive individually, to exploit them.

For these reasons, the IWC has experienced shifts from managing and utilizing whale stocks to protecting and preserving them, with different institutional actors taking the role each step of the way. Today, the IWC is the central international legal regime for the protection of whales. Unfortunately, the IWC’s historical record in conserving the stock of whale species has been extremely disappointing and has been characterized by numerous ideological and structural shifts in policing.

Unfortunately the structure design of the IWC has rested on the hope that states, in their long-term self-interest, would adopt cooperative policies suggested by expert scientific management of a common resource. This hope, however, has not been realized and whales, first one species after another, have become threatened and now endangered. The IWC’s monitoring capacity and ability to muster “peer pressure” against lax enforcers has been extremely limited.

Over the years, as the IWC has undergone the normative transition from a “whalers club” to an official agent of conservation, the whale has slowly begun to symbolize not humanity’s inability to respect the beauty of nature, but our ability to cooperate in order to preserve it. Thus the whale has become a symbol of the ability to achieve international cooperation, illustrating that despite the difficulties involved, it is possible for states with divergent interests and perspectives to compromise. With stories such as Loftsson’s so-called “biofuel” hitting headlines ever more frequently, it is vital that the IWC confront the inherent complexities of these issues and make a conscious decision to continue evolving as an international organization.

Its future will no doubt depend on the willingness of governments to base their policies on the bigger environmental picture – a picture which includes a vision; much more than simply a greener shade of whale.

About the Author Victoria Moore

Victoria Moore holds a first class honours in Geography and an M.Sc. in Environmental Governance from Manchester University. She has worked as a geography tutor and recently returned from a six month journey through Asia. Victoria is passionate about the environmental movement and aspires to have a positive impact on the planet through her work and play!