Western And African Views On The Beauty Of Wildlife 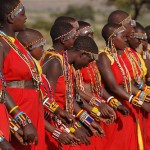 What makes us want to protect wildlife? It’s not a secret that, in many cases, it’s how cute the animals are. We are happy to use our money to help out cool, charismatic animals that we enjoy watching – wolves, tigers, whales, and so on. But protecting a spider, or a worm? Well, let’s say raising money for them it’s not so easy. So what about Africa? Do Maasai people find their wildlife beautiful?

To figure this out, researchers went around Kenya asking local respondents to list animals that they found beautiful – and the results are quite surprising. Where many Westerners often find predators beautiful, Maasai people find beauty in cattle. So, it’s not lions or leopards that are considered beautiful. It’s large, grazing herbivores, whose behaviour reminds locals of their pretty cows. The zebra, with its striped hide similar to Maasai aesthetics of colour contrast, was crowned the fairest of them all.

On the other hands, almost every respondent listed the hyena and the elephant as being terribly ugly, mostly because of their odd appearance. This view is reflected in the answers to the following question: what animals would you save, if God gave you the power to do so? Almost every response stated that herbivores – gazelle, giraffe, zebra, and so on. The only outsider is the lion – while people are scared of it, some still find it beautiful and like to watch it. This might be related to the fact that the species is seen as embodying the Maasai values of strength. The poor hyena, again, was mentioned as a species that needs to be ended. Possibly immediately.

So what is the lesson here?

Well, up to this point, it was generally believed that caring about wildlife looks was typical of Western people, and that people in developing country don’t really care about how pretty their wildlife is. Because of this, most of the conservation initiatives in Africa have so far been based on the economic value of wildlife. It seems, however, that this view is too simplistic. New strategies, that address local aesthetics and focus on species that local communities find beautiful, need to be developed to protect some of the most well-known species on the planet.