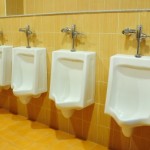 Men might have thought the process of going to the toilet would never change, but it just has. In response to shortages of water in Europe, Kaspar Jursons of Latvia has devised ““the stand,” a sink atop a urinal, which saves water. An infrared sensor is employed to make control hands-free. Water is saved because the H2O used for hand-washing also rinses the unit. It’s marketed under the slogan, “Open up new experiences in your daily habits.” Peeing in the sink just got respectable.

Jursons remarked, “It’s not just a fancy piece of art. The idea is about function and consumption.” When asked if men might find the proximity of sink and urinal unhygienic, he responded, “It is more suitable for hygiene than just a urinal and then guys who don’t wash [their] hands.”

This contraption costs around USD590/GBP396/EUR460 and several have already seen action at a concert venue in Latvia’s capital of Riga, saving hundreds of gallons of water. It has been shipped to Germany, Norway, Poland and Russia.

Men could do with a reminder to wash their hands. A study by the London School of Hygiene & Tropical Medicine found that only 32 percent of men wash their hands with soap after doing what is known in Thailand as a ching chong. It’s hoped that for some time, the novelty of the the Stand will provide further encouragement to men to use it.

Other urinary innovations of recent times include one that allows men to play video games when performing The Act, which is found at a minor league baseball stadium in Pennsylvania, and the “Guitar Pee” urinal seen in pubs in Sao Paolo, Brazil, that plays notes according to where that golden stream hits, recording them on a file named MPEE3.

The next invention planned by Jursons will save not only water, but also even more space.