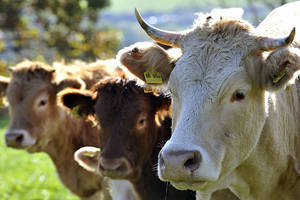 The rampant use of antibiotics on farms by people with no medical training has been denounced at a meeting of the World Organisation for Animal Health (OIE). Authorities in the United States have stated that this makes a significant contribution to the development of drug-resistant infections. There are concerns that a new trade deal between the United States and European Union will weaken tougher European regulations governing their use.

It’s believed that 80 percent of the antibiotics purchased in the United States are given to farm animals to increase their weight, a side-effect of the drug, and as prophylactics to help prevent illnesses that pass easily between animals in sizable feed lots.

One element of the problem is that antibiotics are often delivered by farmers with no medical supervision. A survey conducted by the US Department of Agriculture revealed that less than half of dairy farmers followed vets’ recommendations over antibiotics. At the annual congress of the OIE, Dr Bernard Vallat, the organisation’s director, was convinced of the usefulness of antibiotics in this context, as without the drug, there wouldn’t be enough protein to feed the human population. He was, however, also reproving, declaring, “Antibiotics must be used by people with appropriate training on the risk.” He added, “If they are circulating like … food or sweets, it can be an at-risk practice.”

In Europe, regulations are tighter, and antibiotics can’t be used to aid growth. Negotiations between the European Union and United States are ongoing over the Transatlantic Trade and Investment Partnership, aiming to lessen or eliminate barriers to trade to enhance economic activity. The European Union is on record as saying that consumer, health and environmental protection rules are “not negotiable,” but it’s feared that compromise will be inevitable. Shefali Sharma of the Institute for Agriculture and Trade Policy made plain that antibiotics were a key area in barriers to trade and grieved that the outcome will be that which is least restrictive to trade. The OIE has already endeavoured to encourage consensus over the issue, but thus far without success.

At the OIE meeting, Dr Margaret Chan, director general of the World Health Organisation, pined that the evolution of drug-resistant infections would mean that the world has heading towards a “post-biotic” era. She provided a reminder that a hip replacement or heart or cancer treatment would never be performed without antibiotics.

In the United Kingdom, people fret that government spending cuts could reduce the country’s ability to detect antibiotic resistance in farm animals. Professor Peter Silley of the University of Bradford affirmed that evaluating antibiotic resistance in animals by regular testing was expensive, and there was “much less” of this than there was 10 years back, which he ascribed to budgetary reasons. The Department of Environment, Food and Rural Affairs is responsible for agriculture and has endured the harshest cuts of any government department.