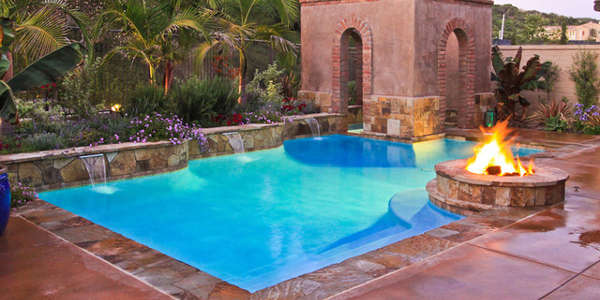 You could be convinced that swimming pools are a thing of the past. In the midst of California’s Mojave desert, somewhere between Joshua Tree and Apple Valley, lies a swimming pool that is five feet wide, five deep and eleven long. It’s a piece of art devised by Alfredo Barsuglia, an Austrian, which he named “Social Pool.” To see it, you’d have to visit and not just phone the MAK Centre for Art and Architecture in West Hollywood to receive the top secret GPS coordinates and a key which must be returned within 24 hours.

A hike of anything from 20 minutes to more than one hour is required. There is no sign or road or even trail. Barsuglia: “You really have to go and search for it.” Your virile four-wheel-drive vehicle will be little use. “I’ve gotten stuck in the sand. Plus, if you drive in, it destroys the desert ecology.” And let’s not forget the scorpions and rattlesnakes. Or the risk of heatstroke.

It should be that swimming pools are a thing of the past. Barsuglia proclaimed, “In a desolate and drought-hit area, a pool is something absurd.” Luxury goods, he added, are status symbols that are expensive but not important for survival. Visitors must bring a gallon of water to replace that lost to evaporation while the pool goes uncovered. Barsuglia insisted that people standing next to the pool come to realise what a luxury it is and ask if it’s really worth it.

With the west of the United States struck by drought that has invited water rationing and political upheaval, it has been asked if private swimming pools, long status symbols in California, are anachronistic. Dick Hebdige, a professor of media studies at the University of of California in Santa Barbara, made plain the problem: there is public concern over pool security, the cost of maintenance, liability and the use of all that water, which people might prefer to use for those minor concerns of drinking or washing. He was certain that swimming pools are a thing of the past. As he wrote, “The private pool is well on its way to outré.”

Per Hebdige, pools waste money and water and bring with them “lawsuits, floating rodent carcasses and summer algae blooms” He likened pools to gas-guzzling cars: status symbols in the middle of the last century but no longer viable. The Los Angeles Times trumpeted that the swimming pool was “rapidly fading as a symbolic and cultural marker of Los Angeles.” Christopher Hawthorne, the paper’s architecture critic, groused that the “brashness” of private pools was “misplaced or antique.” Essentially, swimming pools are a thing of the past.

Pools often show up on screen, as when Dustin Hoffman floated on a lilo in one in The Graduate, a screenwriter played by William Holden was discovered floating face down in one in the initial scene of Sunset Boulevard and a burned and torn teddy bear, having fallen from a stricken aeroplane, floated in Walter White’s in Breaking Bad

58 percent of California has been suffering “severe” drought since May. Ski runs have melted, lakes and rivers dried up, boats marooned, reservoirs drained and farms transformed to dust. Cemeteries are reducing the amount of grass they use. Given these circumstances, swimming pools are a thing of the past. And as Barsuglia explained, people often don’t even use their pools: “They just like to show that they have it.”

Not long ago, California’s state legislature passed a USD7.5/GBP4.6/EUR5.79bn water bond measure, but there is no consensus regarding two proposed 35-mile tunnels to siphon water from the Sacramento river to the San Joaquin valley. Certain cities have deactivated fountains and rationed water. In California, people who waste water can be fined USD500/GBP306/EUR386 a day. If you personally could be hit in the pocket, surely swimming pools are a thing of the past.

There are estimated to be 1.1 million private pools in California. They’re typically oval and 16 feet by 33 feet. Beverly Hills features 2,481 but the poor neighbourhoods of Watts and Florence have none at all. A pool in Los Angeles that is, unlike Barsuglia’s, left uncovered, loses around 20,000 gallons of water to evaporation every year. A leak means saying farewell to another 700 gallons a day.

Barsuglia believes it is not yet true that private swimming pools are a thing of the past for most people. Pools will continue to be glamorous because while most people are conscious of the problems faced by the environment, few will actually change the way they live their lives. He wailed, “That’s one problem with the capitalistic democracy – nobody takes personal responsibility for society.” Swimming pools in the United States aren’t going to become a thing of the past just yet, but, by Crikey, they should. People must be convinced.

Anguish should not be confined to swimming pools. Green lawns, another middle class status symbol, are worse.