Covering The City With Honey, Or How Urban Beekeeping Can Save The World 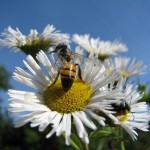 A few years ago, a mysterious phenomenon – ominously called Colony Collapse Disorder – started affecting bees all over the world. Colonies would die out and disappear, and until recently nobody really had an idea of what was causing it. Scientists eventually found out the cause – a mix of pesticides, parasites and poor nutrition. Measures have been taken, and the pesticides that are the main culprit have finally been banned. But that is still not enough, as the number of colonies has already dramatically decreased. Enter urban beekeeping

Urban beekeeping has proven as one of the most successful strategies to restore the population numbers. Several initiatives have been founded across Europe and America, aiming at improving urban ecosystems, involve urban dwellers in nature conservation, and obviously producing delicious honey. Bybi, in Copenhagen, employs former convicts as beekeepers and “honey pushers”. Stadsbijen, in The Netherlands, is installing beehives on rooftops. Urban Bee Co., in Seattle, has people cycling all over the city delivering honey. New initiatives are sprouting every day.

Yes. And it’s not even that complicated.

First thing you need to do is to read a lot. There’s tons of guidebooks around. Then get in contact with beekeepers in your area. Do a course. Then, get started. Beekeeping doesn’t require much space or commitment. You can start with just one hive – you can buy one online. Then you have to buy the equipment, and the colony itself. The best part is that you might even get one for free. Some beekeepers will be happy to get rid of their extra queens, and let’s not forget about swarming. When a new queen is born, the colony splits and part of it swarms away.

Swarms looking for a new place to build their hives are very docile, and even if they can look quite scary they rarely sting. Which is why it’s very easy to collect them, and install them in a new beehive.

So now you have your beehives and your colonies, you’ re talking with your beekeeper mates, and you read a stack of books. What else?

Well, basically, you just have to wait for the little ladies to make some honey for you. Well, there is a bit more to it. But not a whole lot, really. So, are you ready to do your part to save a whole species?