In a bid to improve the standard of Energy Performance Certificates (EPCs), the government has announced a crack down on EPCs in privately-rented houses.

Coming into effect on 1st April 2018, the new strategy will mean that the UK private property industry will be hit with an increased focus on energy efficiency. It aims to ensure that a summary of a property’s energy efficiency becomes an important component of its sales and letting prospects, resulting in national improvement on the issue.

EPCs were first introduced and considered mandatory for properties so that potential buyers, tenants and homeowners could understand the energy efficiency of the property they were interested in. Since 2007 it has been illegal not to have one when selling your house and you could be fined if you do not.

A look at the EPC rating criteria

Under the new plans, properties will require a minimum of an ‘E’ EPC rating, “resulting in major benefits for the tenants and landlords” said Tom Davies from Accelerate Homes. 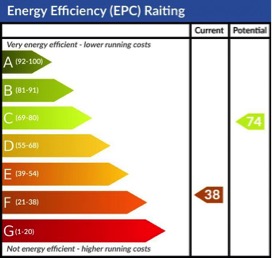 As well as this, the initiative is also a serious bonus when it comes to improvement in sustaining property value.

What it means for the industry

There will be a period of awkwardness and slight difficulty in the sales and lettings of houses in the private property industry leading up to April 2018.

However, improving energy efficiency (see later in the article) is not impossible and, in the long run, works out for everyone.

An increasingly favoured method of accounting, Triple Bottom Line (TBL) is the framework used here for the new EPC regulation. It positively contributes to the three Ps of the framework: people, planet and profit.

As you can see, the new initiative serves the people – home owners and occupants – well; greatly helps out the planet and environment by improving energy efficiency and also works to give a better profit for home owners due to the increase in sustaining property value.

How to change your energy efficiency

It is perfectly realistic for UK homeowners to improve their domestic energy efficiency before April 2018 and to obviously carry it on afterwards.

The graphic shows the government’s reasoning behind the changes to the EPC regulation and how exactly it all works out. In relation to that information, there are three pretty simple things to do when it comes to energy efficiency.

Perhaps the easiest of them all is to purchase some LED bulbs. They are slightly more expensive than others but work out cheaper in the long run. They use 90% less energy than incandescent or halogen bulbs and last up to 25 times longer than them too. See what we mean about cheaper in the long run? As well as this, they are safer and are much more eco-friendly as they avoid substances like mercury, which is harmful to the environment.

It sounds expensive and a real pain, but we promise it doesn’t have to be! There are quite a few government grants going to have insulation installed in your properties, so it’s probable that you won’t be footing the bill for it. The reason why insulation is such a good way of improving your energy efficiency is because it stops heat escaping the property easily and you are therefore using less energy to heat your home.

Up to 27% cheaper to run than a standard storage heater, smart storage heaters are a fantastic way of improving your energy efficiency. They store and release heat at pre-set times and temperatures and come with a boost option for unexpected heat demands. Oh, and not to forget that they’re up to 47% cheaper to run than an electric convector heater too. Smart storage is definitely aptly named.

Data and insight provided by We Buy Any House and Sell House Fast.