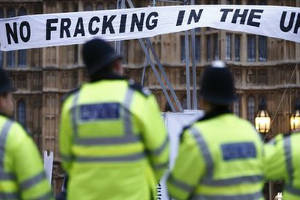 The Queen’s speech contained the announcement of the introduction of a bill to extend rights to fracking companies to run pipelines under inhabited areas without land- or home-owners’ permission.

This proposed extension of trespass rights to fracking companies stands in direct opposition to the coalition’s approach to wind farm developments.

Last year, the government granted greater power to local communities that stand to be affected by proposed wind and solar farm developments, stating that “the need for renewable energy does not automatically override local environmental and heritage protections and the concerns of local communities.”(1)

Alongside this increased ability to block on-shore renewable energy generation, communities have also been granted greater incentives to accept them – the 2013 changes saw a five-fold increase of community benefit packages from £1,000 to £5,000 per megawatt of installed capacity per year. However, local communities have not previously suffered a lack of power – despite 69% of the public claiming they support the development of on-shore wind farms (2), only 35% of wind farm developments proposed in 2012 were successful.

Regardless of this, Eric Pickles, the Secretary of State for Communities and Local Government asserted that “meeting Britain’s energy needs should not be used to justify the wrong development in the wrong location.” (3)

The Conservative’s era of promises to be the “greenest government ever” are well and truly over. The wind farm policy allows the government to distance themselves from the rejection of wind farm developments, meaning that those who are opposed to renewable energy developments (such as George Osborne and Owen Paterson) will see the policy outcome they hope for, without being held directly responsible.

However, the same logic has not been applied to fracking policy. The dangers of fracking, which include groundwater contamination, air pollution, adverse health impacts, and seismic activity, as well as the acceleration of climate change, are well documented. However, in the USA, shale gas (extracted by fracking) helped cut gas prices by 25% between 2008 and 2012 – perhaps the government’s eager support of fracking in the UK is in response to the “cost of living crisis” that the opposition has repeatedly emphasised, and the continuous rise in fuel prices that has been occurring over the last decade.

Unfortunately, the answer appears to be ‘no’. Whilst fracking company Cuadrilla states that “natural gas from shale has the potential… to lower gas prices” (4), Mark Linder, a public relations executive for Cuadrilla admitted that “we’ve done an analysis [of the effect of shale gas on energy prices] and it’s very small… basically insignificant.”(5).

Former British energy minister Charles Hendry wrote that “we may face a golden age for gas, but don’t assume it will be cheap. Last year’s energy price rises owed more to rising global wholesale gas prices than anything else, so betting the farm on shale brings serious risks of future price rises.” He also admitted that fracking would not experience the same success as in the USA, where community consent is much easier to gain due to the sparsely populated nature of the country, and where “prices are kept artificially low by the lack of export facilities.” (6)

However, in May 2014, Portuguese energy giant EDP, which profits from both fossil fuels and renewable technologies, stated that onshore wind production in Europe is the cheapest of all new large scale energy technologies, and is 20% cheaper than natural gas (EDP 2014). EDP’s head of renewables, João Manso Neto, stated that “it is clear, more and more, that… [wind energy] is good, not just because it is green, but because it is cheaper.” (7)

So fracking is more dangerous, more expensive and less popular with the public than wind farms are, and will not help the government meet its Kyoto or Climate Change Act emissions reduction targets. What reason could the government have for urgently supporting such a practice?

Lord Browne of Madingley served as chief executive at energy giant BP between 1995 and 1997; he is now the chairman for Cuadrilla Resources, a company which holds licenses for hydraulic fracturing at ten sites in the UK, and is a managing partner at Riverstone Holdings, a venture capital firm partnered with Cuadrilla. In 2010, Browne was appointed as Government Lead Non-Executive, a position that requires him to advise the government and “to work with Secretaries of State to appoint non-executives to the board of each government department”. Evidently, one of the government’s most senior advisers has a vested interest in creating a welcoming and profitable atmosphere that presents as few barriers as possible to fracking.

The divergence between the coalition governments energy production policy is a prime example of undue corporate influence on government policy. In short, the government is allowing the public to deliberate on proposed wind farms because they do not care if such developments are blocked. On the other hand, the success of fracking in the UK is of vital importance to many of the Conservative party’s donors, and to the government’s Lead Non-Executive, as well as some members of the cabinet. The coalition government’s energy generation policy is “inconsistent and indefensible” in the eyes of the environmental lobby, and is yet another victory for the fossil fuels sector over the electorate.