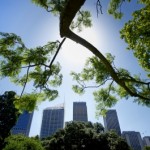 In the sustainability beauty contest, some cities crop up time and time again.

You can bet on Malmö, Copenhagen, Amsterdam and Portland gaining plaudits, but many more emerging sustainable cities are developing.

All of the following ten cities have plenty more to achieve, but their innovation and dedication makes them serious future contenders for the usual suspects’ crowns.

Leicester’s ambitious target is to reduce carbon dioxide emissions by 50% against a 1990 baseline within the next 11 years. Solar panel installations on council houses and carbon efficient lighting are just two of its strategies to meet this aim. And Leicester’s also remembered one crucial element of long-term sustainability: shaping the awareness of the next generations. It’s working with schools to educate and excite children about local food, waste, and energy efficiency, complete with a Kids’ Carbon Calculator to add up their schools’ footprints.

When it comes to California, San Francisco normally takes the green crown, and yet San Jose’s Green Vision plan deserves laurels of its own. This 15 year programme is ambitious, encompassing retrofitting, energy audits, and so many photovoltaic systems that it is now California’s most solar-powered city. Its plans for recycling water have also been a great success, with average daily use of 10.6 million gallons.

With water scarcity and bushfires a dangerous and tangible reality, Adelaide is putting in place a 30 year plan to address the ravages of climate change. A major urban planning overhaul will see reductions in greenhouse gas emissions growth and environments designed to withstand extreme weather conditions, hotter temperatures and rising sea levels. It’s not only macro-level urban planning that’s getting green attention; the plan also includes a focus on planting street trees and ensuring enough space in neighbourhoods for recycling facilities.

Accra played host to the UN Conference on Sustainable Development late last year, and despite having a fair way to go, the city itself is emerging as a future green player. Ranked top in the Siemens and Economist Intelligence Unit’s African Green Index, it scored high on environmental governance, air quality, and clean energy policy. Accra has plenty to contend with after a startlingly rapid rate of urbanisation and much continued poverty; despite this, the Index found good monitoring practices in place and impressive levels of public participation in green policies and initiatives.

Mexico City has been working hard at reducing its carbon footprint for several years, in by 2012, had reached 82% of its goal to reduce GHG emissions by 7 million megatonnes of CO2e. Extensive public transportation, the replacement of 75,000 taxis with more efficient vehicles, and its EcoBici scheme enabling residents to rent bikes for short trips makes this city impress on green transport. Its urban reforestation plan is also well underway, with over 200,000 trees planted to date.

Many would quibble with this inclusion, given the UAE’s status as a major producer of oil, but Dubai is making headway in the green stakes nonetheless. After winning the competition to host Expo 2020, all eyes will be on Dubai’s own implementation of its chosen theme ‘Connecting Minds, Creating the Future’. Solar-powered street lighting, green building codes, and retrofitting are all contributing to bring Dubai in line with the Expo’s focus on shared purpose and global progress by 2020.

This Brasilian gem is so sustainable it has sheep grazing in its parks. Not only that, but over 1.5 million trees have been planted, the downtown area pedestrianized, and a network of 28 parks and forests developed. Keeping its people at the heart of its green endeavours, the city has established an innovative waste and litter reduction programme through which residents can exchange their rubbish for transport tokens or fresh produce.

Bogotá has big, green plans up its sleeve, including replacing the city’s diesel fleet with hybrid and electric buses, reducing taxis emissions and adding a brand new metro line. After dedicated lobbying by think tank La Ciudad Verde, city officials are also committing to improving cycle lanes and pedestrian crossings to enable more people to forgo engines altogether. Its weekly ‘Ciclovia’ see cars banned from main roads each Sunday, an idea copied by other cities around the world from Melbourne to Lima.

After two severe natural disasters in 1997 and 1998, Bahia de Caraquez’s officials chose to rebuild with sustainability as a central focus. This port town is now an eco-tourist’s dream destination, with many organic and permaculture farms (including the world’s first certified organic shrimp farm), biodiversity protection programmes, reforested mangroves, and a major scheme for composting organic waste to support its agriculture.

The collapse of the Soviet Union necessitated major changes in Cuba’s approach to food production. In Havana, decentralisation saw major state farming dispersed and the rise of localised urban cultivation: more than 50% of Havana’s fresh produce is now grown within the city’s bounds. Most farmers work without chemicals, and focus on traditional farming techniques, such as multilayering crops to cultivate them in the ground and above the ground simultaneously. An exceptionally low level of car ownership and a strong ethos of make-do-and-mend have kept Havana more climate-friendly than many of its political opponents’ major cities.

These cities are working hard to embed a green ethos in their infrastructure and policy planning.

Some, like Adelaide, are already bearing the brunt of our changing climate and are preparing residents for the risks of a warmer world.

Others, like Leicester and San Jose, simply recognise that the city of the future is a sustainable city. Whatever their spur to action, each city’s officials and residents have made a commitment to a greener, low carbon future.

A definitive guide to sustainable cities and how they relate to modern social and political landscapes. Well worth a read if you are interested or involved in social and urban planning – perhaps a little heavy for readers not well versed in city planning.The Future of Sustainable Cities: Critical reflections