Are We Back To Having Too Many Wolves? 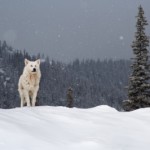 It’s not always easy to be a wolf. People have an innate fear of top predators, pastoralist cultures saw them as a threat for centuries, and well, fairytales didn’t really help in the marketing department. This resulted in the species being eradicated from much of its natural range in the 1800.

By the mid-1900s, however, the tide had turned and the species numbers started to increase again – thanks to a mix of conservation measures and the decline of pastoralism.

That is, in short, the story so far.

Are we back to having too many wolves?

Well, to put it simply, things seem to be going good. Populations keep on growing and wolves have been expanding in parts of their range they have been absent from for a long time – there are new breeding packs in most of Western European countries and in Scandinavia.

Unfortunately persecution is still going on – wolves are still been shot and poisoned and are often the object of general unpleasantness – but attitudes are changing and people seem to be more open to the idea of sharing their land with them.

In the US, numbers have consistently been growing as well, thanks to strict regulations concerning hunting and the institution of large protected areas, such as Yellowstone.

The US Fish and Wildlife Service have been considering the option of removing the grey wolf from the Endangered Species Act, which lists all the species that are under protection in the US.

The justification for this is that numbers are currently so strong that protection is no longer required, and efforts can be focused on the Mexican wolf, which is still endangered.

This decision has obviously been unpopular with conservation groups, which do not necessarily agree with the assessment of the species’ status.

Famous conservationist Jane Goodall spoke about the issue recently, after a trip to the Denali Park in Alaska. Denali hosts one of the most famous and well studied packs of the world, and it’s known to be a great wolf-watching site. Yet, Dr. Goodall didn’t see a single wolf during her trip.

A no-hunting buffer zone has been removed from the park four years ago – resulting in several wolves being killed. Wolves travel a lot and are bound to cross the park’s borders at some point, and relaxed conservation measures are causing these deaths.

The same thing is happening in Yellowstone – Wyoming already removed the wolf from its endangered species list, so any wolf wandering out of the park can legally be killed.

Where is the truth? Hard to say, but to be honest I tend to side with Dr. Goodall. Numbers have been increasing, populations seem to be stable, so the US Fish and Wildlife Service have some grounds for their decision.

However, wolves are highly social animals and the death of a pack member can lead to the destruction of the pack, with dire consequences for the single individuals. Lifting the ban on hunting wolves could potentially result in a sudden decline of population numbers and, in the worst case scenario, extinction.

Do we really want to risk that?

William Ripple has been studying wolves in Yellowstone for a while, you can find one of his papers here, but there are many more exciting articles on Google Scholar. Here is Dr. Goodall bit on the new policy.