The Davos Summit since 2011, ThriveAbility and our uncertain future 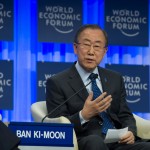 Speaking at the Davos World Economic Forum in January 2011, Secretary General of the United Nations, Ban Ki-moon did not mince his words when he addressed the assembled world leaders, central bankers and CEOs on the challenges in front of them:

“For most of the last century, economic growth was fuelled by what seemed to be a certain truth: the abundance of natural resources. We mined our way to growth. We burned our way to prosperity. We believed in consumption without consequences.

Those days are gone. In the twenty-first century, supplies are running short and the global thermostat is running high. Climate change is also showing us that the old model is more than obsolete. It has rendered it extremely dangerous. Over time, that model is a recipe for national disaster. It is a global suicide pact. So what do we do in this current challenging situation? How do we create growth in a resource-constrained environment? How do we lift people out of poverty while protecting the planet and ecosystems that support economic growth? How do we regain the balance? All of this requires rethinking.”

Dutchman Ralph Thurm’s is one of many voices calling for a renunciation of this “global suicide pact” and a shift in the mindset of business leaders from thinking of sustainability as just another set of boxes to be ticked and KPIs to report against to shareholders.

Thurm calls for governments and corporate managers to lift their eyes from the obsession with measurement and micromanagement of initiatives designed to make their operations marginally less bad and embrace the definition of sustainable development that came out of the Rio Earth Summit over 20 years ago in 1992.

This definition, which is often parroted without much understanding by the ‘sustainability industry’ is:

“The right to development must be fulfilled so as to equitably meet developmental and environmental needs of present and future generations.” Rio Declaration on Environment and Development: Principle 3

In an article published at the end of 2013, Thurm observes:

Thurm advocates replacing the concept of sustainability with ThriveAbility and urges business leaders, economists, accountants and statisticians to play their part in the move to a new paradigm that addresses the big picture problems of how we can collectively find a way of structuring global economic activity that is in accord with the Rio Declaration and is compatible with the long-term survival of human civilisation. See Thurm’s excellent Tedx Talk on ThriveAbility here.

In stark contrast to this talk of an urgent need to find an alternative future for humanity, UK Prime Minister David Cameron’s address to this year’s Davos gathering was an object lesson of short-sighted, business-as-usual empty rhetoric dressed up as some kind of grand vision.

The PM appeared to be pinning his hopes for the UK’s recovery on ‘re-shoring’ jobs that have in recent years been ‘offshored’ by companies seeking cheaper locations for their call centres and his new-found enthusiasm for shale gas:

“There is no doubt that when it comes to re-shoring in the US, one of the most important factors has been the development of shale gas, which is flooring US energy prices with billions of dollars of energy cost savings predicted over the next decade. Taken together, I believe these trends have the ability to be a fresh driver of growth in Europe too. I want Britain to seize these opportunities.”

He was clear that the only way to achieve prosperity is to liberate the wealth creators from the shackles of regulation when he added:

“And above all, we need an unashamedly pro-business regulatory environment – with labour market flexibility, low jobs taxes and a willingness to pave the way for new business and new business models.”

All of which sounds worryingly like a prescription for business as usual, or certainly a return to business as it was before the 2008 crash.

Shale gas exploitation is associated with well-documented local environmental issues around land and groundwater pollution, together with risks of earth tremors and a range of other issues.

It is also a fossil fuel so it represents a continuation of the problem rather than being a genuine solution.

Furthermore, the US experience as documented in Richard Heinberg’s 2013 book Snake Oil: How Fracking’s False Promise of Plenty Imperils Our Future

suggests that the volume of shale gas that is economically recoverable is significantly less than the vast amounts promised by the fracking industry’s hype.

What shale gas does, however, along with nuclear power, is provide a bridge between our oil-fuelled present and a renewable future. It gives a narrow window of opportunity in which the world leaders who gather at Davos each year can decide to abandon the global suicide pact and make the shift to a future built on genuine sustainability (or ThriveAbility).

The danger is that they will instead continue to choose business as usual and it is becoming increasingly clear where that is leading.

Jean Russell’s inspiring and visionary new book challenges the ‘breakdown thinking’ that focuses only on defensive reactions to the economic, social, political, and environmental crises we face. In its place she proposes ‘breakthrough thinking’: an approach that recognizes the gritty reality we face but enables us to envision and co-create a world of wellbeing and health. Thrivability: Breaking through to a world that works