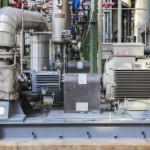 A thermal hydrolysis process (THP) plant is essentially a pressure cooker that begins the process of transforming sewage into methane by heating it to about 160 degrees. The resultant substance, akin to coffee granules, is then placed in an anaerobic digester which breaks it down further, with the temperature reaching 800 degrees for several seconds at one point to destroy toxins. The methane thus produced can be burned to generate electricity, which produces less carbon dioxide than fossil fuels. The fat content could be used to make cosmetics.

The largest water utility in the United Kingdom, Thames Water, saved around USD23/GBP15/EUR18 million in 2012 by generating 14 percent of the energy it required in this fashion. The company has begun to install THP facilities at six of its principal sewage works. By spending USD380/GBP250/EUR292 million on this and other renewable energy measures such as solar panels, it hopes to one day generate 20 percent of its energy. Thames Water terms the process that begins with THP, poo power.

Lawrence Gosden, Thames Water’s director of capital delivery, said that his company presently produces enough electricity to run a city as large as Oxford, which has a population of 150,200, but when all the THP plants come online, it could also satisfy the needs of Woking and its 63,000 people. Not only is this electricity renewable, but it also allows the company to reduce the bills of its 13.6 million customers and protects it from fluctuations in the price of electricity. In 2010, electricity thus produced was fed to the national grid.

THP breaks down the walls of the organisms found in sludge, releasing nutrients and gas. After a spell in an anaerobic digester, between 60 and 65 percent of the organic material in sludge is transmogrified into biogas. Less solid matter remains at the end of the process, reducing by half the number of lorries required to transport it to farmland, where it’s used as fertiliser, which saves USD3/GBP2/EUR2 million a year. Four of the plants will employ a version of a cider press adapted for sewage, which will extract 40 percent more water from the sludge prior to THP, reducing the number of trucks required even more.

Thames Water’s efforts in the direction of renewable energy don’t end there. It also plans to generate electricity from food waste.