The Smart City: Using Technology To Reduce Congestion In London 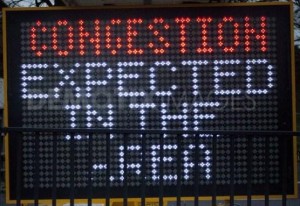 Instead you roll out of bed at 7.30, have a bowl of cereal, put on your make up in the bathroom under a full-sized mirror. You even brew your own coffee. At 8.15, you hop in the car and glide into town. At 8.30 you’re sitting comfortably at your desk, satisfied and unstressed.

Every London driver knows this is a pipe dream. but can technology reduce congestion in London?

In this city, traffic is an inevitable part of the daily grind. The problem isn’t peculiar to London. Road congestion is one of the most enduring, insurmountable challenges of the modern city. And it’s getting worse. City populations across the world are growing, congestion is increasing, and drivers everywhere have to get up earlier and earlier.

But even if a free-flowing road network is a fantasy, a quicker, more predictable drive to work is not. A decade ago London introduced a congestion charge. Drivers now have to pay a daily charge – £10 – if they travel at any time between 7am and 6pm Monday to Friday in the city centre. That’s up to £50 a week, no small change.

The charge had a big effect. In the first five years, the number of cars in the city dropped by 20%. And the number of buses, taxi and cycles increased. Fewer cars, more environmentally-friendly transport. It seems to have worked.

Unfortunately, fewer cars have not always translated into less congestion. One reason for this could be that additional road works have clogged up the city, particularly in the years preceding the London Olympics when there was an increase in construction works.

Another reason is that fewer cars on the main road arteries have freed up space for drivers who used to take alternative routes. This could explain why congestion is still a major problem, particularly on feeder roads in the city centre.

So how would a smarter city free things up?

Traffic is worst at certain times and on particular roads. So one way to solve this problem is by setting up an intelligent pricing system that reflects this. Stockholm already does this, charging cars higher rates to travel at peaks times in the morning and evening, encouraging drivers to take public transport or change their commute time. This is sensible and it works.

In essence, you could create a traffic market. By creating a market, the price of driving would go up when congestion is worst. And just like the economic market, when the price is high, people are less likely to buy. When traffic is worst, people might be inclined to take public transport. Or if they really need their car, find a less-congested route. The result would be that journeys would be quicker and more predictable.

It sounds complicated but with modern technology it needn’t be.

Drivers could input their journeys into a smart phone app to find out the cost of a trip. If it’s too expensive, the app could search for cheaper routes. It could also provide information on public transport, allowing drivers to compare the travel time and cost of the tube and bus to driving.

Of course, the system would not be uncomplicated. For one, price changes would have to be signaled in advance to ensure that the price doesn’t change from the time someone begins their journey to when they are actually driving the route. It would also require investment in traffic monitors, road sensors, a pricing system and a series of smart phone apps. But this is all workable: the technology is available and the demand for a free-flowing road network is as high as ever.

In spite of a series of recent initiatives to reduce London congestion, including a permit scheme to reduce road works and the installation of an intelligent traffic signal system, the Mayor’s Office still predict a 14% rise in congestion over the next two decades. It will take further initiatives to reverse this trend.

As yet the traffic market is only a thought. There is little research and aside from a mention in a city hall meeting in 2011, little political awareness of the idea. But as the city grinds to a halt every morning, and the economic and psychological effects of traffic congestion take their toll, policymakers will eventually look for a smarter solution to London’s daily grind.

About the Author Fionan O'Muircheartaigh

Fionán O’Muircheartaigh is a policy analyst based in London. He holds a degree in Politics from the National University of Ireland and an MSc in Environmental Policy from London School of Economics. Fionán’s interests include energy policy and corporate responsibility.