An Introduction To The Global Role Of Dust 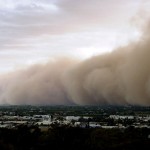 For most, dust does not extend beyond an inconvenience to be got rid of before a nagging relative wipes a judgemental finger-tip over a forgotten surface.

It may even be a particular hassle if you’re allergic to it. Or a real problem if you live in a region prone to dust storms.

In any case, despite – or indeed due to – the miniscule-sized particles, dust is a global shaping force not to be brushed aside. Here’s why.

Dust and our Oceans

Although we may hardly consider the composition of dust, it carries many important elements that have a dramatic impact on the oceans, thus influencing global climate.

Nutrients in dust deposited over the oceans are fundamental to the survival of phytoplankton, which, through the process of photosynthesis, are responsible for a large percentage of carbon dioxide drawdown from the atmosphere and into the oceans.

Such nutrients are mostly iron, nitrogen and phosphorus, and the process is referred to as ocean fertilization.

However, dust falling onto bodies of water may cause problems, too: heavy metal deposition over oceans is connected to coral disease, and a surplus of deposited nutrients can lead to an algal bloom, depleting oxygen sources and drastically altering the composition of an ecosystem.

Furthermore, the potential for dust to act as a pathogen vector over distances vast and small is always present.

It is estimated that half of the dust exported from the Sahara is deposited over oceans. 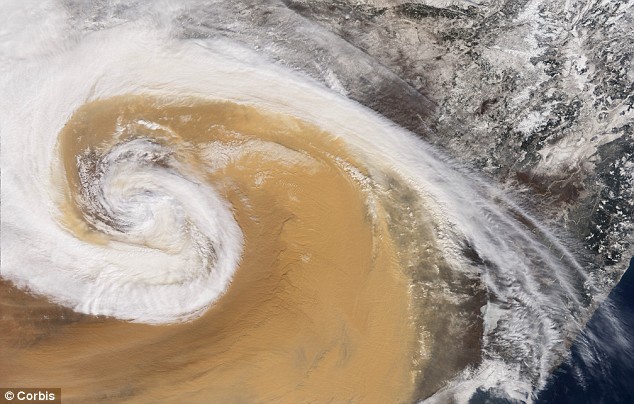 The dust deposited over tropical rainforest zones, such as the Amazon, is also considered to be important in providing the nutrients for vegetation growth, in turn drawing carbon dioxide out of the atmosphere through photosynthesis.

Although the exact role of dust deposition in such areas has yet to be determined, this hypothesis goes far in explaining the immense quantity of biomass supported in otherwise nutrient-poor soils.

Dust sourced from the Sahara, containing significant amounts of iron and phosphorus, can easily be carried by wind over the Atlantic Ocean to provide the Central and South American rainforest with essential minerals once found in the shells of ancient lake-dwelling organisms.

Such mineral dusts can range from <1 to 100 microns in diameter, with size influencing the distance over which they may be transported. Besides size, composition is another key factor determining the potential transport range of dust.

Pollen, for example, is designed to be easily entrainable and is light despite its size, as are other organic elements such as mould and spores.

Dust is indeed so efficient at being transported that sources as far away as China have been identified for dust deposited over the French Alps, as was discovered in one case a decade ago.

What is more, such journeys covering thousands of kilometres require a residence time of dust in the atmosphere of no longer than a week.

Even though most research focus has been on dust deposition and transport, the past decade, especially since the BodEx 2005 project, has seen peaking interest in dust sources.

All the same, quantifying dust emissions from specific sources is a challenge and current estimates still vary by orders of magnitude.

However peculiar it may appear, the largest dust sources are from areas once containing water, such as the Bodélé Depression in Chad in the Sahara or the Aral Sea in central Asia, and these ‘emission hotspots’ are limited in size. Fine dust particles once protected by water are now exposed to aeolian erosion.

Causes for such environmental changes can either be a long-term change in climate, as is the case for the Bodélé Depression, or human activity, i.e. draining and rechanneling, as has occurred in the Aral Sea and Owens Lake in California, respectively.

In related cases of desiccation, the deflation of dust from a terrestrial surface can perpetuate drought conditions through feedbacks, subsequently increasing the availability of dust and henceforth forming a vicious circle.

Besides influencing metabolic reactions involving carbon dioxide, dust in the atmosphere can influence climate more directly by scattering or absorbing incoming solar radiation, depending on its composition. It can thus have an impact on the planetary radiation budget, as well as cloud formation, although much research is still needed to make any conclusions with confidence.

Its significance in global climate regulation has, however, been officially recognised, with the Intergovernmental Panel on Climate Change report from 2001 stating that dust is the only atmospheric aerosol which has the potential to increase or decrease atmospheric temperature at a magnitude similar to that of the effects of carbon dioxide.

Dust is not as simple as it seems, comprising a large range of sizes, with contents as varied as pathogens to iron and pollen to phosphorus.

Its globe-trekker habits can be both beneficial and detrimental to life on land and in the sea, as well as influencing global climate to an as of yet unquantified extent.

So next time you are dusting your room, think about what the dust actually contains and how particles so small have the potential to actually cause changes to a system as large as the Earth’s climate.

Such a tiny thing causing such a huge problem; makes you think.