The Impact Of Global Electronics Consumption And e-Waste Trade 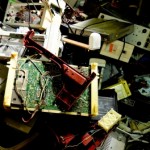 The global consumption of electronics and e-waste trade inextricably links First and Third World countries together through economic development and environmental degradation.

In our modern society, we have come to rely heavily on information technology and computers for everything from work and production, to information and entertainment. It is hard to imagine life without the electronic equipment that is characteristic of our way of life in the Western world.

However, the increased production of electronics has lead to a rapid growth in electronic waste which, when improperly disposed of, is associated with health risks and environmental pollution from toxic components like lead and mercury found in most computers and monitors.

The electronics industry is often perceived as safe and clean, when in reality the industry is one of the most polluting. As a result of free trade mechanisms and globalization, most of this industry is located in Asia, which has a comparative advantage for low-cost production of high-quality electronics, in large part due to extensive work-hours to increase output, along with low wages and lax environmental regulations.

Developing countries taking on the role of both producers and waste managers of the world’s electronics has had severe consequences for their environment and human health. Most industry in Asia is powered by coal, and large-scale industry causes extensive local air pollution in addition to being one of the greatest contributors to global greenhouse gas emissions.

Further, with the increasing global legal and illegal trade of e-waste comes the concern that poor recycling techniques in developing countries, such as dumping, dismantling, and inappropriate shredding, will be incapable of preventing severe strain on ecosystems and people living near the main recycling areas.

In an attempt to further develop and achieve modernisation, fast-growing economies like China and India have embraced information technology, leading to an enormous growth in computer density. The growth in ownership of personal computers per capita in India was 604% between 1993 and 2000, compared to a world average of 181%.

While this has greatly contributed to India’s economic growth, creating benefits in the form of productivity, information flows, and connectivity, the addition to the total stream of e-waste trade has profound consequences for ecology and social welfare.

While it costs $20 to recycle a computer in the US, the same product can be sold for $4 in India, due to its valuable metal components. This works as a driver for a global market for e-waste, which in effect creates a massive transfer of hazardous waste products from rich nations to nations of the global South.

Low labor costs, lax environmental regulations, and the fact that it is legal in the US, despite international law to the contrary, to allow export of hazardous waste with no controls whatsoever, ensure that most global e-waste is transported to recycling facilities in Third World countries that often are plagued with environmental degradation from producing the very same objects.

However, both production and recycling is profitable, and contributes to economic growth that oftentimes is higher valued than environmental protection. In impoverished countries, it is hard to deny people poverty alleviation in order to protect the environment.

Jim Puckett (Basel Action Network) put it well when he said that global trade in e-waste is problematic, and that it “leaves the poorer peoples of the world with an untenable choice between poverty and poison.”

To address the problem of global trade in e-waste, the Basel Ban Convention prohibits hazardous waste exports from OECD countries to non-OECD. Unfortunately, there is still a large illegal market in which authorities are omitted by mislabeling e-waste as “metal scrap”.

In the European Union, a WEEE directive based on a market mechanism called Extended Producer Responsibility, seeks to deal with the increasing e-waste stream by incentivising manufacturers to design products that are easier to recycle. The use of market mechanisms to deal with the rapid growth in the consumption of electronics requires functioning markets and perfect information in order to be effective, a tall order for a global trade that is currently plagued with illegal exports and mislabeling of waste.

While computers and monitors are considered a necessity in developed societies, the waste stream generated from obsolete electronics is detrimental to both local ecosystems and the global environment. Policy decisions and market mechanisms designed to deal with the growth of this sector can help dealing with the associated consequences of e-waste, but it does nothing to address the root cause of the problem, namely, the growth itself.

Thanks, Raffaele!
While some might argue that our waste is creating jobs in recycling in Third World countries, the hazardous conditions under which these people work cannot be justified. The reason for this being profitable at all is lax environmental regulations and poor conditions for workers. In general, consumption can never solve the problems caused by consumption.

Can you please quote the data source for the following information

In an attempt to further develop and achieve modernisation, fast-growing economies like China and India have embraced information technology, leading to an enormous growth in computer density. The growth in ownership of personal computers per capita in India was 604% between 1993 and 2000, compared to a world average of 181%.