The Energy And Greenhouse Gas Emission Future Of Africa 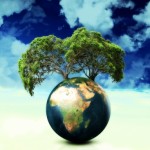 There are concerns that emerging economies such as China, India and Brazil will overtake developed countries in their future demand for energy. This is because the demand for energy in these countries is increasing with their growing population and economy, which will in turn increase the greenhouse gas emissions of these regions as energy-related activities contribute significantly to global CO2 emissions. Invariably, if these emissions are not controlled they will restrain worldwide efforts to stabilize global temperatures.

So how big is the challenge?

The proven oil and gas reserves of the continent are estimated to be 132.4 billion barrels of crude oil and 14.5 trillion cubic meters of gas [2]. Estimating the CO2 equivalent of these reserves reveals the continent has a potential of contributing 59.2 x 109 tonnes CO2 to existing global emissions if all the oil reserves are exploited and 33.7 x 109 tonnes CO2 if all the gas reserves are exploited. Although there are constraints to exploiting all of these resources, a report produced by Maugeri [3] reveals that by 2020, major oil and gas producers in the continent such as Nigeria, Angola, Libya and Algeria will be producing a total of 9.9 million barrels of crude oil per day. This production rate will translate to the emission of 4.43 x 106 tonnes CO2 daily to the global environment if the associated GHGs are not captured with carbon capture and storage (CCS) technologies. In the long-term, the uncontrolled emissions from this region will threaten global environmental stability.

Moreover, recent developments in the continent such as the discovery of larger oil fields in Angola and Kenya, the proposed development of a nuclear power facility in Nigeria and the exhaustion of renewable biomass energy sources on the continent might significantly affect future global energy scenarios and the associated GHG emissions.

Even though emissions from Africa are likely to increase in the coming years, the employment of demand management measures and increased efficiencies could help cut these emissions. The enormous benefits of these measures have propelled developed countries such as the UK to come up with energy efficiency strategies to help save energy and at the same time reduce GHG emissions.

In Africa, the deployment of energy demand management and increased energy efficiency measures such as the use of more efficient cooking stoves, cutting electricity consumption, minimising the use of energy for transport, water savings (water supply requires a lot of energy), purchasing less energy intensive gadgets and adopting new fuel economy standards will contribute to energy savings.

Government policies should be directed at creating a framework for these measures and implementing them to reduce the energy use and demand of the continent, which will help cut GHG emissions from the continent.

Thanks Dami for the comment. Developed countries did emit the bulk of CO2 we have in the atmosphere but they have started making efforts to mitigate the impacts of climate change. Although, it is often argued that their present efforts are not sufficient.

On the other hand, CO2 emissions from developing countries in Asia such as China and India have increased with the growing population and economy. As a matter of fact, China is the largest GHG emitter and India is third. Nevertheless, emissions from China is expected to peak around 2030 with ageing population and a slow down of the country’s economy. On the contrary, developments in Africa might pick up around this time or even earlier.

Despite the fact that emission statistics from Africa are underestimated, there are indications that the continent will increase its emission in the coming years, as the poorer population move to middle and upper class and the continent intensifies its development/industrialization. This means more people will be able to afford energy intensive gadgets in the continents such as cars, home (electrical) appliances and get connected to the national grid. Moreover, the discovery of larger oil and gas reserves in the continent might increase Africa’s appetite for these energy sources.

Dami please note: This scenario might not play out if the continent (Africa) adopts quickly the available mitigating measures from developed countries.

Very well said Mr. Bamishe. The much needed energy efficiency strategies needs to be promoted much more.
Even at the lowest hierarchy it all counts.
For an instance – using energy saving features on our mobile phones, and gadgets in addition to
adopting low energy consumption products in our domestic lives could contribute to lowering global energy consumption index.
Sensitization is however needed so people can realise the effect.

I’ll say Africa is in the best position to undertake GHG measures and other solution strategies. It can simply leap from its current form of development to greener forms of development without having to replace much of current infrastructure that dangerously add to amounts of GHG in the atmosphere.
She should also look into not following the common trend of developed nations in gaining development at the expense of natural carbon sinks (of which Africa’s forest reserves is an example) and biodiversity.