TEDxWWF: One Planet Living – Sharing Stories Meant To Be Shared

Do we need to solve our planet Earth? Our planet won’t need us. It’s actually time to solve our species, humankind, whose existence on planet Earth is seriously threatened. Threatened by whom? By humankind. Our enemy is within. We are simply disconnected from reality.

The WWF European Office celebrated its 25 anniversary on 13 October 2014 in Brussels (Happy Birthday!), and the EU representation of the German state of Bavaria hosted the amazing TEDxWWF event “One Planet Living” on this occasion (1). It was her Royal Highness Princess Laurentien from the Netherlands in person who welcomed and introduced the inspiring speakers of this evening, speakers who shared their personal insights and ideas with an enthusiastic audience.

The speaker’s task: To address the climate challenge, to address the fact that we have already overused our planetary resources by a factor of 1.5 worldwide and even by 2.6 in Europe, to present solutions and to motivate the audience to take action. 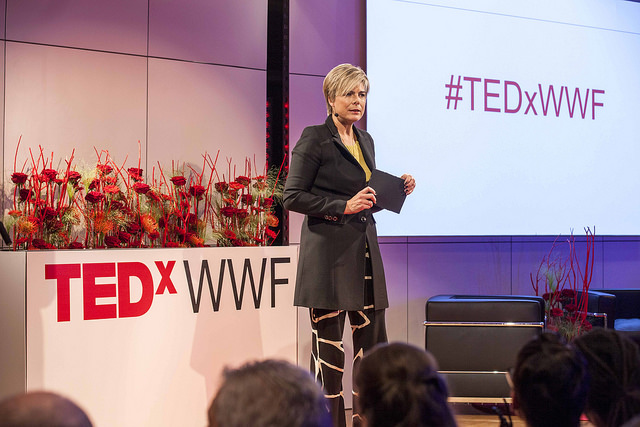 The seasoned environmental campaigner Tony Juniper, (Author of: What Has Nature Ever Done for Us?: How Money Really Does Grow on Trees) answered the question why nature is still in decline, despite all full-bodied commitments by governments, companies and consumers. The answer: The prevailing economic growth and progress ideal is based on the exploitation of nature, ignoring that the economy is 100% dependent on natural resources.

It’s simple: “No nature, no economy, no progress, no business. We need a new economic idea, a bio economy. And we need a shift in mind-set to help us see that our economy is a blue-print of nature, not the other way round,” states Juniper, fervently pushing for immediate urgent action.

Helen Slottje presented community based solutions and impressed with her engaged battle against the shale gas revolution in the state of New York. She shared the story of New York citizens who stood up together against the powerful shale gas economy that threatens the whole country and currently still has the power to do so. Not so any longer in New York: Around 200 communities won lawsuits against the mighty companies and established banning laws towards shale gas. Helen and her husband, both lawyers who have never before been activists in their life, founded the Communities Environmental Defense Council. Helen’s message to all citizens: “Don’t be afraid to stand your ground. Refuse to sacrifice your community. Insist upon your right to leave your children and your childrens’ children a healthy planet!”

Climate campaigner and activist George Marshall (Author of: Don’t Even Think About It: Why Our Brains Are Wired to Ignore Climate Change) shared his insights on climate change action versus non-action, climate change being “the greatest story never told”. Storytelling is powerful. So why does it not seem to work for climate change? “There is a disconnection between what we know and what we do. Most people think that climate change is a threat sometime in the future, not related to their own life.” And while the data and scientific results speak for themselves, our brain stores emotions and stories separately. Stories usually contain an enemy and a hero. “Maybe the enemy towards climate action is within ourselves,” concludes George, sharing his personal story of how he has besieged his soft spot for beef-rich hamburgers in order to follow his values to tackling climate change. “Powerful stories are about personal conviction. I feel powerful. And I want you to feel that power, too!” George encourages the audience. Tony Long, Director of the WWF European Policy Office stressed the need to continually push the European policy towards environmentally sound solutions, based on the common European ideas, values and belief systems for sustainability and a living planet.

While adults sometimes forget about their belonging to nature, children feel as part of nature. “Four year olds do understand that it is not possible to live on a planet while using 1.5 or 2.6 times its resources,” affirms Her Royal Highness. “It’s about action. Children teach us how to act: They simply do.”

Yeb Saño, Philippine Climate Change Commissioner, is currently on a 40 Days Climate Walk in the Philippines: “If world leaders will fail to take ambitious action on climate change, humanity will find a way. We fight for the future of humanity!” See here for details.