What would it take to get you to eat insects? 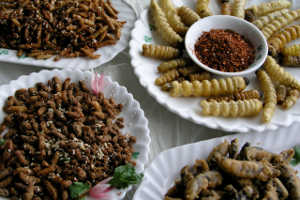 When you eat insects, it’s nicer to term the activity as entomophogy, and there are many benefits to it. Crickets are 60 percent protein while beef is a mere 26. Farming insects rather than larger animals could reduce greenhouse gas emissions by 10 percent. Insects don’t have pain receptors, so killing them plays less on the conscience. Insects are fed waste wheat chaff and not the grain often given to farm animals and they need less food – crickets require a twelfth of the feed given to cattle. At any time, there are 10 quintillion insects – that’s 10,000,000,000,000,000,000.

You might actually eat insects if you remember one food that was initially reviled. It was condemned as unnatural and dangerous and rumoured to cause leprosy or syphilis. It was of the nightshade family, and bore a resemblance to those plants, which are poisonous. When the British government encouraged people to eat this foodstuff in the 17th century, people resisted fiercely. Even peasants turned up their noses at it.

We are, of course, talking about the potato. First grown in the Andes of Peru over 7,000 years ago, it was brought to Europe in 1536 by Spaniards returning from the New World. For two centuries after it was used only as feed for animals, mental patients and the like. Then King Louis XVI of France was persuaded of its nutritional value and his wife, Marie Antoinette, wore a headdress of potato flowers to a royal ball. Now, it’s the world’s fourth most common food crop.

Insects are like that. While people eat insects in 80 percent of the world’s countries, Westerners disdain them unless they’re presented as a novelty. This could be overcome by marketing. Insects can be ground into flour. Six Foods, based in Boston, omits pictures of insects from its packaging, despite that being what the firm sells. It’s Chocolate Chirp Cookies are made from cricket flour, and the founders originally did the grinding themselves.

That’s the trick. Boston Harbour abounded with lobsters in the 18th century, and prisoners were just about the only people who would eat them. They became a gourmet food when the flesh could be canned and eaten by people who didn’t see the devilish-looking animals they were consuming and judged matters purely by taste.

The UN’s Food and Agriculture Organisation is looking into the possibility of insects meeting a greater share of world food needs. The Dutch already farm organic mealworms. Food with insect ingredients could be added to restaurant menus.

If you eat insects, it could even taste very nice: in Man Eating Bugs: The Art and Science of Eating Insects, Peter Menzel wrote that toasted witchetty grub tastes something like “a tender cheese omelette rolled in a smoky philo-dough shell” and Ugandan termites are like “roasted peanut skins, only juicier.” Insects are not to be shied away from. After all, honey is basically regurgitated bee vomit.