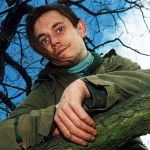 Swampy, then 22 years old, shot to national prominence in the United Kingdom in 1996 as the last man to be evicted from a collection of tunnels dug to block an extension to the A30 road in Fairmile, Devon, where he had been living with other protestors for a week. This subverted a 2,700-mile road-building programme described by the Conservative government of the time as “the biggest since the Romans.” Policing cost £4 million. John Watts, the Transport Minister, declared that he wished to see Swampy “buried in concrete.” The programme was abandoned by the succeeding Labour government of Tony Blair in 1997.

With Swampy’s fame came interviews, fashion shoots and even a stint on the television comedy show, Have I Got News for You, where he was the youngest-ever panellist. The dreadlocked Swampy later became involved in other protests including one to prevent the construction of a second runway at Manchester Airport that same year and another against the nuclear Trident submarine at Faslane in Scotland.

Swampy grew disenchanted with the media and elected to give no further interviews. When he participated in protests against climate change at Heathrow Airport in 2007, he intentionally maintained a low profile so the protest wasn’t overshadowed by his fame. A fellow protestor intimated that some good came of Swampy’s presence at earlier protests, but “The media is too much into lifestyle. They want to know more about where we shit than about what we are protesting about.”

Swampy was the son of middle class parents from Berkshire, although he now has little contact with them. He sired his first child while residing in a squat in Yorkshire and alarmed his fans by giving his profession on the birth certificate as “market researcher,” which is believed to have been a joke. An additional two children later followed.

Since 2006, Swampy has lived with his love partner in a yurt – a dome-shaped tent – in a self sufficient New Age commune in West Wales named Tipi Valley, where there’s no mains electricity – some solar panels are to be found – or running water. Other forms of abode found there include caravans, mud houses and teepees. There, he can be seen with a surfboard under his arm and a boyish grin upon his face. Another resident related that Swampy now merely wishes to “live life and grow his veg.” He responds to journos with a comment of “Not interested.” He no longer wishes to be referred to as Swampy and now goes by his given name, Daniel Hooper. He makes money by planting trees and picking acorns for the Forestry Commission. His children go to local schools. He drives an unkempt, red Transit van. He spends much time running and has completed three marathons and seven half marathons in the last three years.

Swam … no, Hooper, was sufficiently rebellious to take a stand while presentable enough for the papers. He made eco-warriors more acceptable to the public, and was personally rather popular, although T shirts bearing the legend, “Sod, off, Swampy!” did go on sale. While he failed to halt any of the projects where he appeared, environmental concerns are now taken considerably more seriously. The Newbury Bypass, of which the extension at Fairmile was part, is said to be better for wildlife than prior to construction. He fears that fracking could cause water courses to be poisoned.