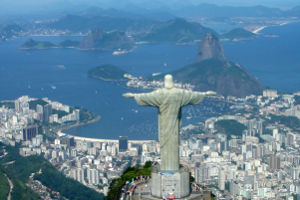 Did they even try? This accusation might be levelled at the Brazilian football team following their performance against Germany, or, indeed, it might be levelled at the Brazilian government in their attempt to reduce the environmental impact of the World Cup. Huge organisational challenges, accusations of corruption and allegations of human rights abuses have overshadowed the effort to make the recent mega-event more eco-friendly.

This is not to say, however, that FIFA and the Brazilian government wholly ignored their environmental responsibilities. Over 27.5 million tonnes of carbon credits were purchased to offset emissions since Brazil won the bid for the competition in 2007. Some stadiums were fitted with solar panels and teams of garbage-collectors were brought in to gather and recycle the tens of tonnes of aluminium cans left behind by beer-swilling fans.

The greatest legacy of the World Cup in terms of sustainability, however, lies not in solar energy, recycling or offsetting dangerous emissions. It lies in the extensive programme of infrastructure construction projects which have provided and will continue to provide affordable, sustainable transport solutions for millions of Brazilians.

45 sustainable transport projects were implemented by the Brazilian government at a cost of $3.6 billion, including 17 road expansions, in the run up to the World Cup. Not all projects were finished in time for the fans’ arrival, but upon completion they will serve a country previously crippled by a lack of public transport facilities. Furthermore, projects such as the 160-km Bus Rapid Transit system in Rio de Janeiro complement the government’s wider vision for better urban mobility of residents, tourists and business travelers. By April 2015 all major towns with a population of over 20,000 will have to produce plans to increase urban mobility, using the projects built for the World Cup in cities such as Rio and Belo Horizonte as models. Priority will be given to proposals which eschew polluting modes of transport in favour of the environmentally-friendly kind. Some local authorities have already introduced schemes such as bike-sharing in Salvador and a trial of electric vehicles in Curitiba.

There is, of course, a long way to go. Some projects remain unfinished, others were blighted by safety concerns and the rest remain at the planning stage. Moreover, infrastructure built for the World Cup was also limited to the cities which hosted matches, leaving much of Brazil still in dire need of sustainable transport development. However, the recent sustainable projects, particularly the Bus Rapid Transit systems which can make journeys several times quicker than cars in Brazil’s crowded cities, are a step in the right direction. Brazilians might wish to forget the score against Germany, but they will be grateful for the infrastructure benefits which the World Cup will continue to bring.