A Sustainable Future For Fish 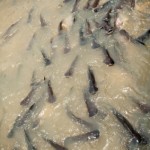 Responsible fish farming just took a major leap forward. The CEO-led Global Salmon Initiative (GSI) has announced its adoption of the rigorous Aquaculture Stewardship Council (ASC) Standard. The 15 companies signed up to the GSI represent approximately 70% of the global salmon industry, making this commitment a significant milestone. WWF, who launched the development of the ASC nine years ago, has described the move as a “game-changer”.

The Marine Stewardship Council is providing protection and advocacy for wild fisheries, but having a standard in place for farmed fisheries is becoming increasingly important. The trend for high protein diets shows no sign of abating, despite calls for “fish free Fridays” and high profile campaigns on our dwindling fish stocks. The world’s wild fisheries simply won’t be able to meet future protein needs if demand continues at the projected rate, making aquaculture a firm fixture in our food system. Two years ago, aquaculture production surpassed global beef production by volume for the first time. Salmon is particularly popular: nearly two thirds of all salmon consumed comes from farms. But this farmed fish, whilst being essential to meeting consumer demand, gets a bad press for its negative impact on coastal areas and wild fish populations, its overuse of antibiotics, and its contribution to the spread of parasites and diseases. The ASC Standard addresses all these aspects and more, with criteria on every possible impact area from child labour to respect for traditional territories of aboriginal and indigenous peoples. It encompasses far more than an environment-focused standard alone, addressing the full gamut of supply chain issues. This will benefit not only the cited stakeholders but also the many food manufacturers and retailers that are increasingly trying to stock responsibly sourced salmon.

The GSI members are aiming to bring the farms they operate in line with the Standard by 2020 and will be assisted on their journey by WWF and the ASC. As their chair Alfonso Marquez de la Plata says, “we cannot choose between a healthy environment and healthy food, we need both.” We will have to wait until 2020 to assess if they’ve reached this goal.