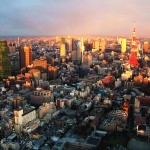 For most people, Tokyo is regarded the epitome of a techno-mecha, a city that fosters technologies of tomorrow. Tokyo is the largest region in the world, having reached 35 million inhabitants by 2007.

As a result, a safe assumption would be that Tokyo is an unsustainable metropolis and probably one of the most polluted areas in the world. However, contrary to popular belief, Tokyo is renowned for its forward-thinking environmental conservation.

In 2009, a report was released by the World Bank, demonstrating Tokyo’s Climate Change Strategy, a 10 year project that started in 2007. This was a carefully thought-though project, with a set of goals, policies, and the initiatives that needed to be followed in order to meet their objectives.

1. A new approach towards energy use. The target was to shift to a low-CO₂ society, a society where people are able to enjoy a comfortable urban life on minimal use of energy

2. More effective use of renewable energies, such as solar power, to enhance Tokyo’s independence on fossil fuels

3. Progress in the passive use of energy, using wind, light and heat naturally, especially in homes. The idea revolves around dynamics between buildings, and the relationship with surrounding nature

4. The development of a greener city, with the low-CO₂ social systems and technologies that generate new urban-style businesses

In order to achieve these goals, 5 initiatives were created.

3. Lay down rules for CO₂ reduction in urban development: Formulation of energy conservation specifications for building which were applied to facilities of Tokyo Metropolitan Government (TMG); promotion of effective utilization of energy and use of renewable energy in local areas.

5. Create a TMG mechanism to support activities in respective sectors.

As a result of this campaign, Tokyo was named the greenest city in the Asia-Pacific region, according to an evaluation by specialist consulting firm Solidance, in 2011. The evaluation was based on CO₂ emissions, energy usage, transportation facilities, air quality, water, waste treatment, “green space” and “environmental governance”. Although Tokyo represents more than 43% of Japan’s urban population, its emissions levels per capita are far below compared with other high-income developed countries.

A proud member of the C40 Cities initiative, Tokyo has a long way to go in order to reach its goal by 2020. What is important though, is that it has shown the path cities and governments should take in order to become more sustainable. Considering that 67% of energy related GHG are produced from cities around the world, cities should be on all government’s priority lists.

This book investigates how the meanings and politics of urban sustainability are being radically rethought in response to the economic downturn and the credit crunch. In this ground-breaking contribution, prominent scholars provide up to date coverage of the impacts of recent changes on key areas of urban planning, including housing, transport, and the environment, and map out core areas for future research. The Future of Sustainable Cities: Critical Reflections