Sunscreen: Are We Killing Coral While Protecting Our Skin?

It may be the middle of winter for some of us, but on the other side of the world, summer reigns.

For coastal areas, this inevitably involves a lot of time spent on the beach and a lot of time in the sun, which translates to a lot of sunscreen. A seemingly innocuous product, it turns out that actually, sunscreen contains substances that are best kept away from the natural environment.

Although research is still in its early stages, two key studies, published in 2008 and late 2015, have identified oxybenzone as the offending chemical and coral as the hardest hit victim.

Why Is Coral Important?

Coral reefs are considered ‘biodiversity hotspots’, covering less than 1% of the world’s ocean floor while providing the habitat for roughly 25% of all known marine species.

They are important carbon sinks, and losing them can be considered ecologically equivalent to the loss of rainforests.

Reefs also provide protection for coastlines and coastal settlements, acting as a buffer for erosion and storm surges, in this way supporting the livelihoods of over 500 million people living in the tropics.

Many compounds used in medical and pharmaceutical products can be harvested from coral reefs.

And of course, their impressive appearance attracts tourists, contributing greatly to local economies. According to estimates by the National Oceanic and Atmospheric Administration, coral reefs are the source of $30 billion in tourism revenue globally each year.

Oxybenzone [benzophenone-3] is a chemical that protects skin from both UVA and UVB rays. It is found in 3,500 sunscreen brands worldwide, including Coppertone, L’Oreal Paris, Hawaiian Tropic, and Banana Boat, as well as in cosmetic products, bath oils, insect repellents and even in some dish detergents.

Somewhere between 6,000 and 14,000 tonnes of sunscreen reportedly end up in coral reef areas each year, either washing off our bodies directly into the sea, visible as an oily sheen on the water surface, or reaching oceans from wastewater discharges.

How Does It Affect Coral?

Oxybenzone has been found to damage coral, at concentrations as low as 62 parts per trillion [or a drop of water in six and a half Olympic-sized swimming pools], in the following ways:

Corals form a symbiotic relationship with a species of algae called Zooxanthellae; the coral provides a home for the algae and the algae provide food in exchange.

The disruption of this relationship and associated loss of colour is referred to as bleaching.

This can occur when a virus infects the algae and replicates to the point of causing the coral to explode, thus contaminating the surrounding environment.

It can also happen when the algae begin producing harmful oxygen radicals triggered by higher temperatures, a situation exacerbated by climate change. The coral expels the toxic algae, effectively starving itself to death.

It is predicted that almost 40% of the world’s coral reefs are currently affected by bleaching and one quarter of these cases are associated with sunscreen pollution.

Detrimental Effects On Other Species

Oxybenzone has been found to cause reduced fertility in mice and rats, as well as the large-scale death of plankton, which are vital for providing oxygen to the planet.

In terms of being harmful to humans, there is no conclusive evidence, despite oxybenzone being easily absorbed through human skin, and detectable in urine within 30 minutes of being applied. 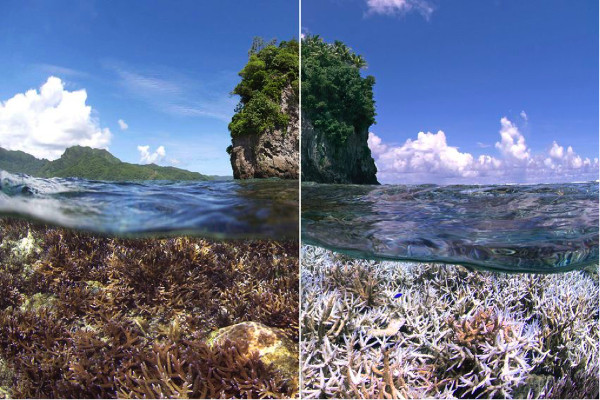 Relatively little has been done; nevertheless, toxic sunscreens have been banned in parts of Mexico, with similar efforts ongoing in Hawaii. Additionally, the testing of sunscreens for harmful chemicals by third parties has been proposed as well as clear and thorough labelling of all sunscreen contents.

At our level, we can opt for UV-protectant clothing and ‘reef-safe’ sunscreens (also see here ].

Convincing But Not Conclusive

Albeit tempting to accept that humans have caused yet more damage to the natural environment, it is wise to remain cautious about such findings.

In this case, coral samples were harvested from the ocean and placed in tanks with artificial seawater, where they were exposed to differing concentrations of toxins. While indeed neither the full scale nor the natural environment were entirely replicated, such is the nature of scientific experiments and the current findings are important in guiding further research.

So… what is actually damaging corals?

Is oxybenzone in sunscreen harmful to corals? Yes. Is this the only problem? No.

The survival of coral is unfortunately at the mercy of the same factors which threaten much of our planet’s natural environment: climate change, ocean acidification, pollution, overfishing, with the added factor of decreased resilience due to exposure to toxins, i.e. oxybenzone.

While we struggle to manage the larger issues, being able to point a finger at a specific substance and take action can give us just a little hope that we are taking steps in the right direction.