Study highlights that Chinese sperm quality is falling due to pollution 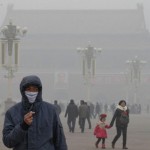 It has been known for some time that pollution is adversely affecting the sperm quality of Chinese men. Now, a study has gone some way to proving it and been published in the journal, Environmental Pollution.

The study was led by researchers from China’s Third Military University. It compared the sperm quality of men residing in Chongqing City, an industrial city in the southwest of China, with those in nearby rural areas. 1,300 men were examined. City dwellers had more abnormally-shaped sperm and their sperm also swam more slowly. The shape of sperm and what it’s funky to describe as its motility are important to male fertility.

The scientists determined that air pollution was responsible for diminishing sperm quality. Levels of particulate matter, nitrous dioxide and sulphur dioxide in Chongqing exceed World Health Organisation guidelines, eightfold in the case of particulate matter. The study concluded, “Exposure to higher concentrations of PM10, SO2, and NO2 in urban ambient air may account for worse semen quality in urban males.”

Dr Ahmad Hammoud, an Assistant Professor of the University of Utah and Medical Director of the Utah Center for Reproductive Medicine, was not involved in the study but is certainly an expert in reproductive health. He explained that particulate matter includes polycyclic aromatic hydrocarbons – PAHs – which “can have hormone-like activity … so they can possibly affect the hormonal balance in the body.” PAHs can also contain a great number of other pollutants, for instance cadmium, lead and mercury, which can be toxic to sperm.

There has been much discussion in the scientific community of reported declines in sperm quality. In Australia, a sixth of couples experience difficulty in conceiving naturally, with half of cases connected to male infertility. The proportion is the same in the United Kingdom. The journal, Human Reproduction, published a study demonstrating that the sperm count of the average Frenchman had fallen by around a third from 1989 to 2005. British sperm fared similarly over the same period, as shown by a study of men attending the Aberdeen Fertility Centre undertaken by Aberdeen University. A further study that appeared in Human Reproduction identified traffic pollution as deleterious to sperm quality, based on examination of 85 men employed at motorway tollgates and another 85 who were otherwise employed but lived in the same area.

Studies into the effects of pollution on fertility in China have tripled in the last five years, from 23 in 2008 to 68 in 2013. Dr Liu Liangpo, a researcher for the Chinese Academy of Sciences’ Institute of Urban Environment, bewailed that pollution in China made for a “particularly grim” situation: “Polluted water, unsafe food, bad air … so many things are threatening the reproductive capacity of Chinese people.”

Liangpo added that with pollution, there was no need for a one child policy. The state-run Xinhua news agency reported that infertility among Chinese people of child-bearing age increased to 12.5 percent in 2010, compared to a mere three percent two decades before. Over 40 million people on the Chinese mainland have been diagnosed as infertile.

Jo Immig, the national co-ordinator of the National Toxics Network Australian pressure group, repined, “It strikes at the very heart of who we are as a species if we are actually starting to say that the things that we are doing to the environment are stopping us from reproducing.” She asked what effect pollutants could be having on human health overall, with cancers, the immune system and neurological problems in children all possibilities – what she called “the full spectrum of disorders.”