Tokolau, a small island nation in the South Pacific, has become the first country in the world to run entirely off solar power. The grouping of 3 atolls that constitutes Tokolau has achieved another first beyond giving up reliance on fossil fuels. It is the first and only country to meet 100% of its climate change obligations. Officially a territory of nearby New Zealand, it is a small developing nation heavily dependent on aid.

The shift towards renewable energy is a joint intitiative between the government of Tokolau and the New Zealand Aid Programme. Funds for the Tokolau Renewable Energy Project (TREP) were provided by the latter party as part of aid commitments to the South Pacific region. 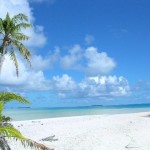 How does it work?

Tokolau is now able to fully meet its power requirements from new solar installations. The islands electricity demands are provided by 4032 Photovoltaic (Pv) panels, installed across the three atolls. Whilst this has the potential to provide 150% of the energy needs of the islands’ 1,400 inhabitants, it is supplemented by coconut biofuel. Utilising a highly abundant resource, this biofuel is a reliable back-up in times of emergency or during extended cloud cover.

In the past, Tokolau was fully reliant on diesel-powered electricity. Importing 2,000 barrels yearly from New Zealand, Tokolau suffered a huge financial burden. A common issue throughout the Pacific region, many nations spend equal to their GDP on fuel imports. This leaves already vulnerable countries defenseless against international oil price fluctuations.

Close to the hearts of many Pacific Islanders, is the ever encroaching issue of climate change. With most islands susceptible to rising sea-levels, efforts to curb climate change have always been a priority in this region. With the highest point of Tokolau sitting at 5 metres, they are no exception.

Unfortunately, it is unlikely that the impact of their fossil fuel reductions will be noticed in global reductions data. It is the sad irony of climate change that those most effected and thus working the hardest to reduce emissions, have often emitted the least. This raises the important moral issue of environmental justice in emissions reductions.

Tokolau is not the only country to follow this path. New Zealand is also working with other island nations, including Tonga and the Cook Islands, to develop renewable energy. Other Pacific Islands such as Fiji and the Solomon Islands are set to follow Tokolaus’ example in the coming years. Countries such as Scotland and Saudi Arabia are also pursuing similar goals of 100% renewability. Tokolau offers an encouraging example of what is possible through collective perseverance towards change.

Congratulations Tokolau. There are a few of us in York UK who also want 100% renewable, clean power, and we look up to nations like you to give us a good example. We in the UK have fantastic wind, wave and tidal resources, yet our stupid government is following a gas-extraction path, which will mean that there’s no way we’ll hit our agreed target of 80% CO2 reduction by 2050. So, well done!