What To Do About Somerset Levels As The Floodwaters Rise In Somerset? 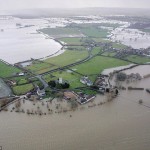 January 2014 was the wettest month in the UK since records began, according to figures from the Met Office.

The persistent heavy rainfall has led to flooding across many parts of the UK, some of the worst being in Somerset where the communities of the Somerset Levels have been inundated since Christmas with so prospect of relief in sight.

The situation in the Levels represents a microcosm of the plight facing populations in many low-lying areas of the world as sea levels rise as a result of climate change. These are communities founded on land the very edge of what is habitable and therefore uniquely vulnerable to any small change in the delicate balance of climatic factors that made settlement possible in the first place. In the case of the Somerset Levels, much the area actually lies below sea level and is an artificial landscape created by drainage and water management since Roman times.

There has been a bitter debate locally and in the pages of the regional and national newspapers about the supposed failure of the Environment Agency to keep up with the dredging of the main rivers that drain the Levels, thus condemning the people living there to suffer a catastrophe that should have been averted.

The ‘to dredge or not to dredge’ debate is one of those that seems simple on the surface – which appeals to politicians who like a clearly defined moral high ground that they can occupy – but that becomes more complex on further investigation. It seems common sense that a watercourse will be able to carry a greater volume at a more rapid rate if it is provides a clear, deep, straight channel than if it is silted up or partially obstructed with vegetation. Indeed, all things being equal, a watercourse in the former condition will indeed operate more efficiently as a conduit for water than one in the latter state. Therefore, is it not blindingly obvious that regular dredging is essential and, if the government agency responsible fails to carry out this work, is it not clearly guilty of appalling negligence?

The key phrase here is ‘all things being equal’. In conditions such as those currently prevailing on the Somerset Levels, the dredged and canalised watercourse and the un-dredged river with its naturally occurring silt deposits and vegetation may be equally ineffective in preventing flooding.

The problem is explained by Professor Roger Falconer, Professor of Water Management at Cardiff University:

“To reduce significantly the peak water levels one needs to increase the hydraulic gradient, i.e. the water surface slope, and thereby increase the flow from the marshes to the sea. This will not be significantly achieved by dredging. What dredging will do is to increase the area of flow, which will marginally increase the flow over the short term. Furthermore, the dredged bed will rapidly readjust itself with time to the natural hydraulic conditions – over a relatively short time – and one is then back to square one, i.e. more flooding and more dredging. Added to this one has climate change and rising sea levels, thereby reducing the hydraulic gradient even further and making the problem worse.”

The fact is, given the vastly greater capacity of a river floodplain to hold water than the channel of the river itself, even doubling the capacity of the river is going to have very marginal benefit in terms of flood alleviation especially if this ‘hydraulic gradient’ is small. The problem, says George Monbiot, is the way in which the upper reaches of river catchments have been stripped of their ability to mitigate the flow of water from the hills into the rivers. To address this, he says:

“That means, broadly speaking, the following:

Former Director of Friends of the Earth, Tony Juniper, agrees that we need to look at the management of whole catchments and floodplains rather than only starting to think about the issue once rivers have burst their banks. Writing in the Guardian, he like Monbiot points to the way in which the ability of the uplands to hold rainwater and slow down the rate at which it flows into the rivers has been compromised by generations of mismanagement:

“In upland areas, the degradation of peat soils by burning, drainage and the cutting of peat for fuel means that the many areas of blanket bog that clothe Britain’s hills and mountains can no longer serve their function as giant sponges that catch and hold rain. Instead, water runs off the land, exacerbating flood risk downstream.”

As with many instances of Man’s interaction with the environment, cause and effect are not always linked in the most obvious way. In the case, the misery caused by the floods on the Somerset Levels may have less to do with the Environment Agency’s failure to dredge the River Parrett and River Tone and more to do with farming and land management practices on the Quantock and Mendip Hills. Unfortunately, these are subtleties that do not readily lend themselves to memorable soundbites at Prime Minister’s Questions or snappy headlines for the front pages of the papers.