In 2008, at the height of the global financial recession a husband and wife team, Michael and Ann Reaney, decided that something needed to be done to improve the job prospects of young people in their local area. After careful thought the couple decided to open a charity shop with a difference in heart of Birmingham. They christened their altruistic project “Grow-A-Job”.

6 years on the “Grow-A-Job” programme has been hugely successful and resulted in scores of unemployed young people finding work.

Their philosophy is simple but effective. Give an unemployed young person a six month placement offering real work experience, training and a reference.

The jobs programme is funded through their recycling business.

Ann Reaney said: “We all know the difference helping someone out of unemployment can make in someone’s life, so I am asking you to join in our ‘Grow a Job’ campaign. 100 black bags of unwanted items is worth around £570, which will provide a month’s employment for a young person in our new enterprise.” (1)

The recycling sector has become an important feature of the UK economy in recent years and has even out stripped growth in the overall economy. Britain’s exports of recovered materials are worth more than 4 billion pounds a year to the UK and support around 30,000 jobs according to the Department for Food and Rural Affairs (DEFRA).

Lord de Mauley for DEFRA said: “Used clothing has a massive commercial value, yet over 350,000 tonnes goes to landfill in the UK every year. There’s scope for all of us to think more wisely about the things we throw away. Re-use and recycling are not only good for the environment, but drive an industry that is creating jobs and helping to grow the nation’s economy.”

Lawrence M Barry & Co (LMB) is another example of a successful entrepreneurial business in this sector. LMB has grown from a modest 3 man operation into one that boasts over 170 UK staff and export partners across the globe. Each week the company sorts up to 200 tonnes of clothing. 80 per cent of which will be sorted and exported for reuse.

The environmental impact of clothes recycling

A percentage fall of £25% and 20% respectively from December 2013 which reflects the global depression in recovered textiles at present. 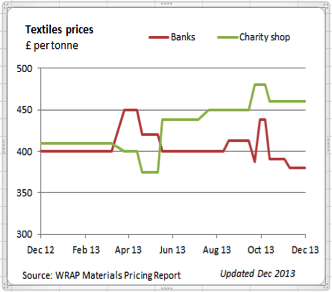 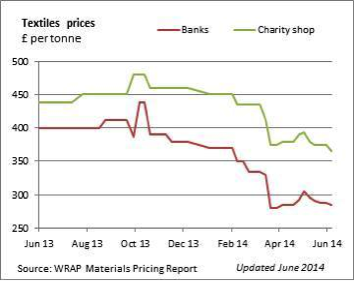 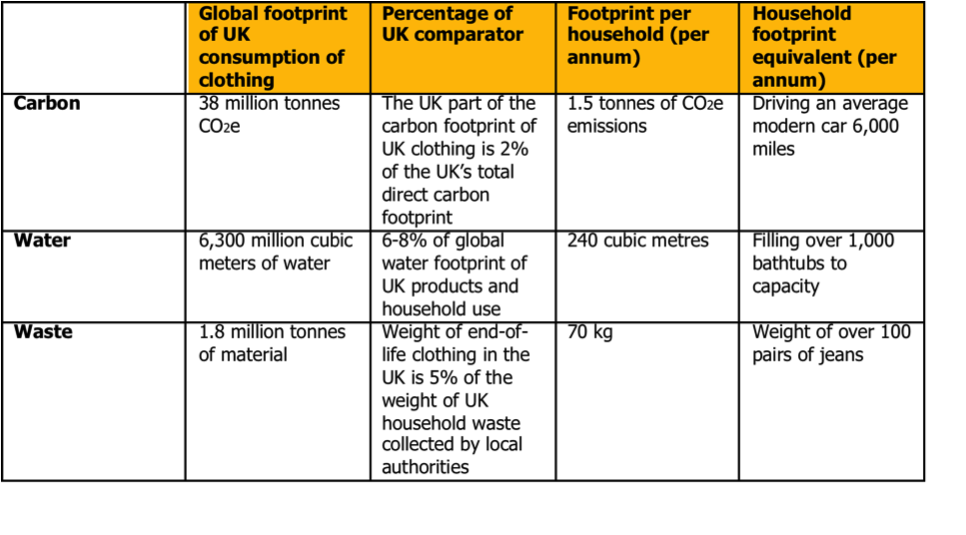 Footprints on clothing (carbon, water and waste) – WRAP (2012) – Valuing Our Clothes: the evidence base

It is clear from the evidence that we cannot simply ignore how we dispose of clothing anymore. To truly improve the sustainability of our planet we need to consider how best to get rid of our used clothes and challenge that old adage: “out with the old and in with the new”. Instead we should consider a new adage: “hold onto the old and put off the new”.

Chinese philosopher Lao Tzu said “Give a man a fish and you feed him for a day. Teach him how to fish and you feed him for a lifetime.” I remembered this quote as I read on and realized the purpose of the UK textile recycling industry. They do not only give clothing to those people in need but they are offering them means to survive and a livelihood to continue to earn money and make a living. For me this is such a wonderful opportunity we are giving those people in need. We are not only providing them help to make ends meet but we are giving them an opportunity to live their lives properly and well.