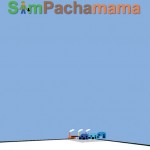 An exciting educational tool to promote environmental awareness has been developed by academics and conservationists around the world. The simulation tool, called SimPachamama (‘Mother Earth simulation’ in local language), is based on extensive scientific research of a real-life Amazonian community and simulates the actions and behaviour of villagers near the agricultural frontier in Bolivia. A game offers a great way to get insight into the multiple values of ecosystems for environment and local communities, and into political challenges this complexity creates.

The player is presented with a satellite view of the frontier community that captures the patterns of deforestation and agriculture. The player takes part as the major of the community, and the objective is to implement policies that improve human well – being as much as possible without destroying the environment. The major can do so by altering the public policies of the community to improve well – being, reduce inequality and reduce negative environmental impacts.

One can choose from four policy measures: public investment, investment in in non- agricultural jobs, tax on deforestation, conservation payment scheme. The budget constraint experienced by the mayor of the community is central to the game – if the major implements too expensive policies, he runs out of money, the community gets bankrupt and the game is over. Similarly to global politics, there is the international financing button that can be switched ‘on’ or ‘off’ (based on the major’s decision). When the button is ‘on’, the major will receive a reward for every hectare of reduced deforestation calculated in comparison to the business as usual scenario.

The game simulates the passing of time and allows to ‘look into the future’. The “Go” button makes time start running and the player can track the passing of time in the ‘year’ display. SimPachamama will run for 20 years, unless the mayor runs out of money before that. By the end of the simulation, the player will receive the score depending on how well he has been doing as the mayor, i.e. how ‘happy’ the planet is based on the situation of the community in terms of well-being and deforestation per capita.

Simulation tools had originally been developed for the hard sciences, but have been since also widely used in the social sciences. Of course, some issues are specific to social sciences and the relevance of computer stimulation to understanding human societies therefore needs to be considered carefully. Calculating the business- as – usual for setting the deforestation tax and fair distribution of international payments are just a few issues that are less straightforward in the real life than captured by the game. Any social simulation is a simpliﬁcation of some very complex world, and SimPachamama is no exception. One should not hope for such an experimental game to capture all possible individual behaviours or the diversity of how policies impact local communities and environment. However, it can be a great education tool to help understand the complexity of the issue we are dealing with.