Role Of Business In Adapting To Climate Change 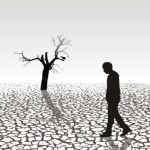 While many businesses are engaged in climate change mitigation efforts by reducing their carbon footprints, less has been achieved by the private sector in addressing climate change adaptation strategies.

Adaptation to climate change is however becoming a necessity as hopes of reducing warming to the required and ‘safe’ 2°C threshold are fast declining.

The requirement for businesses to develop adaptation strategies for climate change is likely to increase. Here I discuss the determinants of vulnerability to climate change as well as provide examples of businesses taking innovative action to adapt. (image: Vlado)

What determines vulnerability to climate change?

Private sector vulnerability to climate change is a well documented field in the climate change adaptation literature. Yale professor Rob Mendelsohn, a recognised scholar in environmental economics, together with his colleagues found that temperature change has a has a higher impact in certain sectors. In particular, sectors that are dependent on natural inputs such as the agricultural, forestry, water and energy industries are most vulnerable to climate change.

His analysis also indicated that developing countries are exposed to higher potential impacts due to the fact that many are located in low latitudes that are already too hot. For the lucky organisations and citizens situated in the developed world this is not necessrily a ‘get out of jail free card’ as the globalisation of markets and supply chains will mean tha impacts in far off countries will be felt globally. Organisations that operate across borders or who are dependent on resource inputs from multiple states will thus be exposed and vulnerable to climate change

To understand vulnerability better an increasing number of methods and techniques are becoming available for a more detailed and firm-specific climate risk assessment. One of the noteworthy examples is a technique developed by Acclimatise, an advisory and digital application company providing expertise in climate change adaptation and risk management. The company has developed a web-based tool that allows investors and banks to screen their assets and identify climate risk.

The Private Sector Initiative (PSI) (part of the Narobi work programme under the UNFCCC) has developed an interesting database of on-going and planned climate change adaptation activities undertaken by private companies from a wide range of regions and sectors. Below, I will look at a few examples of good and profitable practices:

Thames Water, the UK’s largest water and wastewater services company serving London and the Thames Valley, depends intimately on the natural environment. Climate change adaptation and future resilience is named as one of the nine sustainability themes within the company’s sustainability strategy. Main areas for action between 2010 and 2015 cover: water resource planning to ensure the security of future water supplies, uplifting design standards for new assets for enhanced flood protection and ensuring flood resilience through a development of an analytical framework to assess asset resilience to flood hazards.

The Common Code for the Coffee Community (4C) Association has developed the Climate Module for green coffee production that helps to guide coffee producers to adapt their production to the changing climate. As part of the efforts to meet the required sustainability standards, Nestlé Research and Development (R&D) Centre in Tours, France, works with its sister R&D Centre in Abidjan, Côte d’Ivoire, as well as other research institutes to ensure sustainable production in the future climate. The advanced first- class cocoa plants are stronger, less vulnerable to disease and potentially yield twice or even more than average trees in cocoa farms today. These more resilient plants will be better adapted to deal with the current and projected impacts of climate change and will provide Nestlé with a reliable supply of high-quality raw materials.

International Union of Railways (UIC) has undertaken an extensive feasibility study analysing the impacts of climate change on rail transportation infrastructure. This led to the development of the Adaptation of Railway Infrastructure to Climate Change (ARISCC) project. ARISCC focuses on an integrated management of weather and climate related natural hazards such as flooding, severe storms, landslides, rock fall, avalanches etc in a way that keeps and improves railway infrastructure performance and avoids or minimizes damage to railway infrastructure assets. As a result of these efforts, UIC’s members (200 railways worldwide) can save money by using ARISCC tools and resources to incorporate information about future climatic conditions into today’s investment decisions.

As the ski industry relies heavily on snow precipitation, which is likely to be significantly impacted by climate change, there is a strong need for ski companies to incorporate adaptation into their decision making processes and business operations. At existing ski areas, slope development adaptations include: slope contouring, landscaping, and the protection of glaciers. In addition to the modiﬁcation of existing ski terrain, the development of new ski terrain in less vulnerable locations is commonly cited as an adaptation to climate change. Expansion of ski areas into higher elevations, where snow cover is generally more reliable and a longer ski season is possible, appears to be one of the principal climate change adaptation strategies being considered by ski area operators in Europe.