Stop Rhino Poaching And Save The Rhino

Earlier this year I was back home in South Africa and had the fortunate opportunity to go on a safari in the Eastern Cape. I have always enjoyed safaris. There is something immensely exciting and sometimes humbling about spotting and watching wildlife.

On my recent trip we were lucky to see a wide variety of antelope, warthog, buffalo, elephant and the highlight, a lion kill. We also saw two white rhino which was very exciting.

I had heard about the plight of the rhino, but had never really paid attention to the statistics. I was shocked and deeply moved when our game ranger started explaining the scary facts and figures about these incredible animals.

Rhino poaching has been a serious issue since the early 1900s. Rhino horn is seen as a very valuable commodity in the Far East where it is used as a medicinal cure prescribed for fevers and convulsions, as well as an aphrodisiac.

Although it has been struck off the Chinese medical register and disproved as having any medical benefit, the demand for rhino horn is still very much alive. In fact, a single rhino horn can fetch as much as $250,000 in China and Vietnam, today! 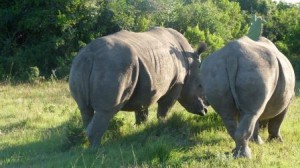 Due to conservation efforts since the late 1990s Rhino numbers have started to increase slightly; nonetheless, the damage has largely been done. There are now approx. 4,500 black rhino and 20,000 white rhino left in Africa and about 3,000 Asian rhino, with the Javan rhino species consisting of only 50 individuals.In one century we have butchered and decimated this brute of an animal.

And we continue to do so. Last year, 448 rhino were killed for their horn in South Africa alone. At this rate there will be no wild rhino left by 2030. For me this is a truly staggering statistic and an environmental catastrophe. There is a very high probability that our children won’t get the opportunity to see a rhino in its wild habitat. Unfortunately, like most major environmental issues, the damage goes largely unseen until it is done.

Conservation and raising the profile associated with the unprecedented scale of rhino poaching in Africa and Asia is key to the future of the rhino. If you  would like to find out more or lend a helping hand I recommend visiting the Save the Rhino charity website.

“Never doubt that a small group of thoughtful, committed citizens can change the world. Indeed, it is the only thing that ever has.”
Margaret Mead