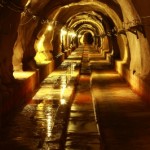 Resource Efficiency has been a buzzword for strategic corporate planning since the start of industrial revolution. Back then, companies were satisfied with a diet of few metals and enough biogenic materials, but today the ingredients have changed and pretty much every element in the periodic table and organic material in the world has been employed to quench the thirst of the ever-complex and rapidly changing ‘voice-of-customer’.

Company directors have been strategizing over energy procurement, raw materials, transport, labour and intellectual capital; but it has been a recent phenomenon that governments have started eavesdropping into boardrooms to take the sense of panic effervescent behind closed doors or from annual financial and sustainability reports, heralding an emerging regime of state capitalism.

Thus, it’s no surprise that layman on the street get intrigued by all the hue and cry as can be depicted by any crude concept-map. Such collective networking can be easily spotted when it comes to more apparent natural resources like cement, food, energy, water etc. But there are many resources which are usually hidden from the so-called prying eyes of the public.

Citizens around the world are finding their personal budget affected due to these hidden critical raw materials termed peak minerals. One such category of peak minerals is rare earth elements (REEs), whose supply risk and economic importance has become an important component of corporate scenario analysis and governmental policy assessments recently. Although the elemental cost periodic table and associated price volatility are used for reporting metal criticality, factors like higher consumption rates, geo-potential, difficulty in extraction and beneficiation processes, metallurgical relevance to low-carbon agenda and the fact that demand has been rising exponentially for past over 2 decades have not yet been applied by integrated reporting fraternity for public consumption.

Resource nationalism and geopolitics has heated up around the world with regional governments exercising anti-WTO stand over control of natural resources and companies squabbling for engineering talent with allied skill-set, thus causing social disruption and smuggling from conflict-affected zones in some cases.

On the government side, UNEP has already called for decoupling of mineral resources use and its allied environmental risks from economic growth while ICMM has urged the mining and metals industry to play an important role in extended producer responsibility as part of their corporate climate-change mitigation efforts.

The European Commission launched the ‘‘European Raw Materials Initiative’’ in 2008 and most recently, EU FP7 project POLINARES (Policy on Natural Resources) highlighted policy recommendations for the same. This year, the US created a multi-million-dollar Critical Materials Institute on the same lines as the famed Manhattan Project and also added Critical Materials Strategy to the National Strategic Narrative, which goes to show how seriously the leaders are considering the topic of critical materials as a national security threat in the near future. UK based university professors and scientists at the British Geological Survey have been proactive in identifying End-Use Energy Demand Reduction avenues for the National Energy Efficiency Strategy, one product of which is creation of an IN-DEMAND centre promoting industrial symbiosis, knowledge transfer initiatives, collaborative R&D, entrepreneurial incubation, with propensity towards the collective goal of achieving material independence.

China, with its upstream monopoly, has already laid its cards on the table, so that its REE metal production does not hurt the environment and local industries like agriculture (due to its higher return on investment), while other BRIC nations are also not far behind with Brazil, the largest producer of copper, taking cue and launching its own national programme and India, with its 25% of world’s thorium deposits, has a vision of installing thorium based nuclear reactors by 2020.

Closer to home, the EU has partnered with US & Japan to develop new process models for efficient management and recycling of REEs.

On the corporate side, a subsidiary of the British arm of a major American defence company has already won rights to mine ocean beds for prospective metals, owing to the probability of the presence of rare earth elements being more than 10 times the proportion on land. Then there are other more adventurous companies acting like space cowboys hunting for near-earth asteroids to fulfil the seemingly arduous task of mining their surfaces for minerals.

Uncertainties are huge and as a result of this mania, stakeholders are forgetting that environmental limits still represent the ‘ultimate’ constraint on material consumption, characterized by present day mining being an environmentally debilitating industry. Materials not only carry the energy, carbon and innovation footprint in their lifecycle but also the expectations that it will perform best under all the stresses and strains of theoretically unlimited recycle-loops. Corporate financial analysts are realizing that substantial reductions in GHG emissions cannot be achieved by reductions in GHG intensity alone, but through the reduction of scale in the economy and investing in options for low-growth, decarbonization and diversification.

Considering recovery from global recession may ease global investment in new mine equities thus creating a mini bubble, mineral exploitation it will always be marred by the quality of deposits. While governments are busy formulating incentives for realization of the low-carbon circular economy agenda and OEMs are conceptualizing product stewardship and mitigation strategies, society at large cannot be just a mute spectator.

For instance, if there’s a consumer driving a hybrid vehicle who has to get his car’s motor magnet (owing to wear) changed before the mileage point his eco-friendly investment becomes carbon neutral (when it overcomes its carbon-payback period), but finds out that the price for neodymium has grown by more than 200% (2010 figure), sooner or later, he would realize that the environmental-cost-benefits of his investment was not as favourable as he thought of while buying it. Thus, consumers have to become part of the solution through governance measures of participatory management of resources. That’s why, OEMs have to start investing in resource diversification, latest extractive metallurgy, supply chain diplomacy, eco-design and involving customers for efficient stewardship.

This is the only approach which can result in increasing the end-of-life recycling rates of rare earth elements to more than 1% (2011 figure).

In nutshell, material resource consumption needs critical thinking for all stakeholders in the value chain. It’s not about hugging (pun) a wind turbine generator or finding the windiest place alone, but to make sure it incorporates an easily recyclable alternative to the dysprosium in its gearbox from the producer perspective and best-possible stewardship from the consumer perspective.

About the Author Guru Sidhu