PricewaterhouseCoopers – How Businesses Can Prepare For Climate Chaos! 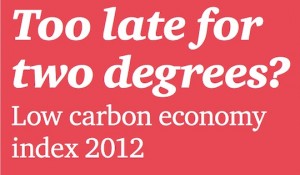 A damning new analysis by PwC warns that a 6°C warming is increasingly likely at current rates of decarbonisation.  The report from the PwC Low Carbon Economy Index 2012, is called ‘Too late for two degrees’. In a rather understated way it shows that that warming may be 4°C higher than the scientifically regarded ‘safe level’ of 2°C, and how this will have a huge impact on certain businesses.

The annually produced ‘Low Carbon Economic Index’ highlights the need for businesses and governments to include 4°C and 6°C scenarios into their planning.

Coming just weeks before the UN Climate Summit in Doha, the findings draw into critique global efforts in combating climate change.  Current government ambitions to stop warming rising above 2°C seem unrealistic in light of this new report.  PwC outlines that in order to keep the temperature rise below 2°C, the world would have to decarbonise at a rate of 5.2% annually until 2050.  In the UK, that would be equivalent to shutting down all current coal-fired power plants.  Rates of decarbonisation at such a level have not occurred since WW2.

However, rather than aiming to ‘scaremonger’, PwC is simply pointing out the mathematics of the situation in the hope that governments and businesses can forecast accordingly.   The report stresses the need to form comprehensive plans to adapt to future warming.  This indicates a predictable shift in policy focus from mitigation to adaptation.

How businesses can prepare for climate chaos?

The industries hit the hardest will be those in carbon intensive sectors and those with investments in climatically fragile zones. Investors in low-lying or coastal areas especially must consider more pessimistic climatic scenarios.  Carbon intensive sectors may have to anticipate more invasive carbon regulations in the future.

Those sectors dependant on water, energy, food and other such ecosystem services need to examine their viability.  In the latter case, it not only means planning for disruptions in the supply of input materials caused by climatic events.  It also means assessing the resilience and security of their inputs.

The report highlights the importance of ‘resilience’ as a term that will become increasingly relevant in assessing future viability. It does not advocate a ‘sit-back and wait’ approach.  It has strong recommendations for the uptake of renewable energy and industrial emissions reductions.  It advises the continuation of mitigation by companies whilst preparing for adaptation.  With a sobering sense of realism, it tells the science how it is and advises the business world to be ready for change.

In this hard-hitting book, Dieter Helm looks at how and why we have failed to tackle the issue of global warming and argues for a new, pragmatic rethinking of energy policy – from transitioning from coal to gas and eventually to electrification of transport, to carbon pricing and a focus on new technologies. Lucid, compelling and rigorously researched, this book will have a lasting impact on how we think about climate change. The Carbon Crunch: How We’re Getting Climate Change Wrong – and How to Fix it