Pursuit Of The Sustainable, Smart City 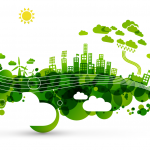 Smart phones have not only taken over the sphere of mobile technology but also that of personal computers in general, as increasingly we are shopping, researching and communicating from the palm of our hands. Now smart homes and smart offices are being whispered about as we strive for quicker, more efficient, and more sustainable technology.

None of this however is as exciting as the prospect of smart cities, which we are told will change our lives radically by incorporating disparate aspects of a city into a synergy with its citizens, allowing for a better quality of life and greater protection of the environment.

A smart city is a city in which various aspects and components of that city – from energy, to transport, to security – work in conjunction. This relies on machine-to-machine technology that allows machines to communicate and respond to each other with minimum human interference.

Speaking at the 18th Annual International CleanTech Summit Eddie Bet-Hazavdi, director of energy conservation and smart cities at the Energy, Water and National Infrastructures Ministry said that, ‘The smart city aspires to optimal use, sustainable use, of all the resources while maintaining balance in the social and economic systems.’

Bet-Hazavdi was arguing that for a city to be truly sustainable there needs to be a more holistic approach to smart city development.

Moscow has recently incorporated M2M technology into its transport system notifying drivers of the whereabouts of the nearest free parking spot. A similar scheme is set to be incorporated by the M2M technology company Deutsche Telekom in the Italian city of Pisa.

However these are not the overhauls that Bet-Hazavdi believes are necessary for the truly smart city. Of course, because so many cities are old and built up it is incredibly difficult to overhaul established structures as a whole. Instead what appears are niches and regions of smartness within the – in comparison – creaking and chaotic whole.

The Energy, Water and National Infrastructures Ministry is already in the planning stages in developing Israel’s first smart city. One can look at the attempts to modernise London’s 150 year old underground system, for example, in the hope to relieve congestion. The Israeli Government hopes it to be a city that encourages a ‘sustainable society based on concern for human beings and the environment, along with the optimum integrations of science and technology.’

Bet-Hazavdi said that for this to be the case it was necessary to involve all government departments and NGOs working in the country.

With Bet-Hazavdi at the helm, perhaps it will be in Israel that the world sees its first truly sustainable, smart city.

About the Author Danny Mortimer

Danny has recently completed his MA in Economics and Political Geography. After a year out working in a conservation park in East Africa, Danny hopes to return to London to embark upon a Ph.D.