Protected Areas: For Whom And By Whom? 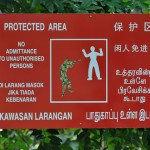 Protected areas are undoubtedly the way forward in environmental conservation: human interference with nature is controlled, income is created through tourism and awareness is raised within the general public. Right?

Well, actually, this is not always the case.

I dare assume that we have all visited a national park or nature reserve, perhaps on an exciting childhood holiday, or are at least familiar with the concept through the media.

For me, this experience was the Kruger National Park in South Africa. It was indeed almost 20 years ago, but I knew the animals were free and wild (and dangerous) and I understood this was how it should be.

However, a university degree in geography later, I now realise that protected areas are not the perfect solution they are made out to be, and even in this do-good industry, political, social and economic issues are at play.

Furthermore, there is no single interpretation or implementation of a protected area; they can range from absolute prohibition of human intervention to permitting traditional agriculture and natural resource use by the scientific community.

One shocking example of a protected area with a disputed story is the Chagos Marine Protected Area in the Indian Ocean.

Despite their location, these 55 islands, previously considered a part of the Mauritian Archipelago, are now classified as British Territory. They were declared a no take marine zone, and such a strict protection policy meant that the local inhabitants were exiled, which already begs the question of whether such measures are acceptable.

What’s more, there was talk of the creation of a people-less zone for the establishment of a US military base, creating even more doubt as to the motives of creating such a strictly protected area.

Is environmental conservation actually not much more than a guise for political motives?

Translocation of populations from protected areas is a dominant issue regarding the intentions and impacts of nature reserves. There are even examples of native populations exterminating wildlife from their locality for fear that they will be displaced.

I have begun to wonder whether saving the environment in such a glorified manner is truly the way forwards, or whether sometimes external intervention is simply a fancy form of neo-colonialism.

Of course, I continue to love nature and appreciate efforts to save it, but unfortunately, the naivety of such pure motives has fast been dispelled.

Welcome to the real world.