The Spider Web Analogy – Principles Of Ecological Restoration And Agriculture 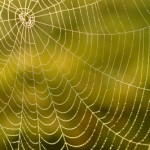 In today’s guest post, Pablo Canales-Prati and Kajo Stelter from the University of Bonn present a fascinating article on the principles of ecological restoration and agriculture. The team describe a spider web analogy to illustrate the complexity and fragility of an ecosystem. A thoroughly enjoyable and relevant read! (image: Tina Phillips)

Relevant scientific literature defines Ecological Restoration in a variety of ways which differ chiefly in the emphasis each one places on objective. Many scientists see the purpose of ecosystem restoration in reintegrating a certain degree of healthiness to a system; in effect, this means halting and then reversing the process of degradation. Other scientists prefer to call this rehabilitation rather than restoration because, for them, restoration is clearly defined as re-establishing the initial state of an ecosystem before humans interfered with it. In regard to Ecological Agriculture there is even greater confusion concerning terms and definitions. By the restrictiveness of their particular practices we could maybe distinguish the different methods and philosophies of Ecological Agriculture. The purpose of this article, however, is not to underline the differences but rather to present a comprehensive overview of the principles which apply as equally to Ecological Restoration as they do to Ecological Agriculture.

An ecosystem is much like a living organism. It has a metabolism which needs to be sustained by energy; be it healthy or unhealthy, it constantly processes what it is fed. It evolves, is always in motion and undergoing change. In most cases it interacts continuously with neighboring ecosystems and sometimes maintains long distance relationships with others. It grows, is sensitive to outside disturbances, and can also be killed. Pondering on the similarity between ecosystem and living organism, one sometimes starts to wonder whether it might not also possess an intelligence of its own, albeit one that is impossible to measure or even detect. Looking at it this way Ecological Restoration might even acquire an ethical dimension of its own.

Four major components of an ecosystem

When we talk about the metabolism of an ecosystem we usually distinguish four major components that enable such a system to maintain itself. Chief amongst these of course is energy. Generally, energy enters the ecosystem in the form of solar radiation which is absorbed by chlorophyll molecules in the vegetation. This injection of energy kick starts a chain reaction of electrons which passes from molecule to molecule within the plant. Not all of this energy will be absorbed, however, some of it being emitted from the plant in the form of heat thus creating new conditions to stimulate further reactions. Indeed one packet of solar energy may do quite some traveling undergoing numerous transformations along the way before finally ending up on our dinner table or in the gas tank of our neighbor’s car. Scientists describe the journey of energy through an ecosystem in terms of a cycle. In a similar manner to energy the other three components of an ecosystem’s metabolism cycle through the system. We classify them as: elements (like nitrogen, sulfur or carbon), water (an element of such fundamental importance that it gets a classification all of its own), and organisms (plants, animals, microbes etc.).

The cycle of energy, the cycle of elements, the water cycle and the succession of organisms, from these four vantage points begin the examination of an ecosystem. Each cycle is composed of a chain of processes, the percolation of water through the soil, for example, or the aggregate wetting of the soil. Other important processes include the manner in which plant roots absorb water, and the evaporation of water vapor from the leaves. Each of these individual processes usually relates to numerous further processes involving each of the four cycles. Once soil layers become moist elements are dissolved and transported, microbial activity is activated and electrons are captured by certain elements because of the sudden change to a reducing environment.

Spider web analogy for an ecosystem

This may all sound rather abstract, but we might imagine the multitude of complex interconnections between the four processes of the cycle as looking something like a spider’s web with each little thread representing a certain process. The web is suspended on four sides by the branches of a tree with the respective anchor points representing our four cycles. Now imagine how the web responds to various disturbing conditions, a strong wind, for example, that rushes through it and shakes the tree; or raindrops which, crashing into it from every side, catch on the silken threads and trickle slowly down. The web will shake and shiver, it will twist and turn into various different forms as simultaneously some sides stretch and others shorten. Nevertheless, as long as its anchor points hold it will resume its former shape as soon as the wind dies down. The quality of the threads and the superstructure into which they have been woven make a spider’s web flexible enough to cope with such disturbances. Even if flying leaves carried on the storm snap some of the tiny threads the web does not lose its ability to function. When the sun comes out again it can still catch small insects and over time damages to the web will be repaired by its creator, the spider—we might even go so far as to say that the spider in our little analogy represents time itself.

The natural flexibility of the spider’s web helps to illustrate the dynamics of an ecosystem’s cycles. A highly dynamic web is extremely flexible, and the more flexible it is the more resilient it is towards disturbances. But there is a limit of course to this resilience. If one throws a large enough stone through the web too many threads (that is too many processes) will be snapped and the spider will be unable to repair the damage.

Unfortunately humanity likes to throw very large stones and ever since the dawn of industrialization these stones have been growing larger and larger. Disturbances to the ecosystem are of course inevitable but those initiated by humans increasingly have the potential to threaten the entire system. To revive a damaged ecosystem it is enough to shield it from further disturbances while allowing time do the healing. To restore a severely damaged system, however, a more proactive approach becomes necessary; especially if the aim is to restore the ecosystem to its original state (which is almost always impossible considering the complexity of processes involved in the four cycles). In a large deforested area, for example, special tree species would have to be planted to prevent further disruption by erosion and to rehabilitate a particular cycle of succession. To combat desertification where over-irrigation has deprived the natural aquifer of its water supply it would be necessary to regulate the waterways (maybe by constructing canals and diverting rivers) before vegetation could once again flourish on the barren land and begin to regulate the water cycle on its own.

Protection and reinforcement of the processes involved in the four cycles also happens to be the chief principle of ecological agriculture. For example when farmers make use of integrated pest management (IPM) to avoid the application of chemical pesticides, they plant flowers which attract exactly the types of insects that like to feed on those organisms harmful to their crops. The method works by fostering the cycle, or rather, the food chain of the organisms involved. When farmers refrain from ploughing their fields before planting (the so called “zero-tillage” method) the organic matter remaining in the soil from the previous crop is prevented from being exposed to air. This inhibits the multiplication of oxidizing microorganisms, thus slowing the process by which organic matter becomes mineralized. As a consequence of this slowing process organic content gradually accumulates and the soil ends up possessing both a larger stock of nutrients and a greater capacity to retain water. In effect, one single procedure initiates all the necessary chain reactions in the elements, allowing both nutrient and energy cycles to proceed undisturbed.

Recalling our analogy of the spider’s web we can now see how the spider—time itself—is the one true master when it comes to the maintenance of a highly complex system. Time is the key factor in any project of either ecological restoration or ecological agriculture. The greater the degree to which processes are planned then forcefully installed, the higher will be the likelihood of an unsatisfactory outcome. Projects aimed at restoring ecosystems fail either because they have not been granted the requisite time or because the complexity of interlinked processes has been underestimated. Up to now we’ve restricted our image of a spider’s web to two dimensions and this has made it relatively easy to visualize. But to form a truer picture of the complex series of processes involved within the cycles of energy, elements, water and organisms we would really need to imagine a spider’s web in three or even four dimensions.

Pablo Canales-Prati and Kajo Stelter bith completed their masters in Agricultural Sciences and Resource Management at the University of Bonn. The spider web analogy is a novel concept that the team developed to make ecosystem restoration more intuitive for the layman reader.

Begon, Townsend, and Harper′s Ecology has long been regarded as the definitive textbook on all aspects of ecology. This new edition provides a comprehensive treatment of the subject, from the first principles of ecology to the current state of the field, and aims to improve students′ preparedness to address the environmental problems of the new millennium. Ecology: From Individuals to Ecosystems