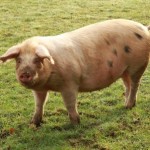 67 percent of the meat eaten in China is pork, and demand for this meat is growing worldwide. As a result, China features 1.8 million pig farms with more than 700 million pigs, which produce 1.4 million tons of faeces a year. Pig manure contains antibiotics and growth hormones to promote growth, which find their way into human bodies with adverse consequences.

Currently, only 10 percent of this manure is used productively – as fertiliser – which presents profound health issues. While not at all nice, porcine excrement is rich in nutrients such as nitrate and phosphate. In an act that rates as alchemy, all that shit is now being used to produce biogas.

In the course of more than a year, a project driven by Adelaide’s Co-operative Research Centre for Contamination Assessment and Remediation of the Environment (CRC CARE) has devised technology to deal with one of the largest and most odiferous waste disposal problems in the world. CRC CARE’s partners in China include Huazhong University of Science and Technology, one of the best 10 universities in China, and the company, HLM Asia PL. The project has met with success, earning it recognition by the US government in the form of a Federal Government Star Award for innovation.

A two-phase anaerobic biodigester was developed by the project in Wuhan in central China that transforms great quantities of pig manure into biogas. It has been christened pooCARE and proven in practice. Now, efforts are afoot to scale up the endeavour to cope with China’s many pig farms. Reactors can be from 33 to 98 feet long and from seven to 13 feet wide and the transformation process takes 13 days. Reactors currently cost around USD34,000/GBP22,300/EUR26,000, but when they are produced en masse, the cost per unit will fall dramatically. 200 tons of waste can be treated a day, producing more than 13,400 cubic feet of biogas worth USD40,000/GBP26,000/EUR31,000 and 5,600 tons of fertiliser with a value of USD530,000/GBP350,000/EUR410,000 annually. CRC CARE is collaborating with the Australian pork industry to use the technology in Australia. A pig producer willing to trial the technology is being sought. There has also been interest from India, South Africa and Fiji.

Previous attempts at this technology were situated above the ground and so subject to changing temperatures which affects efficiency, but CRC CARE’s version is stored underground and maintains a constant temperature.

CRC CARE’s managing director, Professor Ravi Naidu, said that one of the world’s major problems had been solved, making the pork industry considerably more sustainable. To accomplish this, it was necessary to comprehend the problem of animal waste in order to develop a business case, divide the solid and liquid waste produced by pig farms according to its nitrogen, heavy metal and phosphorous content, develop advanced technologies to remove nitrogen and absorb heavy metals through biochar and construct a bioreactor.

Professor Naidu declared, “Pig poo might seem like simple stuff, but it creates a very complex set of environmental problems.” He was pleased that CRC CARE and its Chinese partners had overcome the problem by means of lateral thinking that created a practical and affordable technology.

Our collueage has been using his pig farm manure to generate electricity for 31 years. In addition we have shown through independant verification that we can increase the release of the bio-gases by 42%.The technology is simple, cost effective and effecient.
PPP ‘Pig Poo Power’

I think that there is a much better way to process pig waste: https://dl.dropboxusercontent.com/u/22013094/Paper/Summaries/Alternative%20to%20Biodigestion.pdf

This very good.I am a big pig farmer based in Nairobi kenya.Kindly transfer your expertise over.
Many Thanks
Nancy