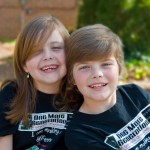 One more generation is a non profit organisation founded by two elementary students in Fayetteville, GA in late 2009. This truly inspiring story details how the two helped educate kids and adults about the plight of endangered species so they can save them for at least “One More Generation… and beyond”. Registered as a nonprofit in January of 2010, the founders are Carter (now 11.5) and his Sister Olivia (now 10) There huge passion for cheetahs and education into there extinction encourage them to try and save more endangered species.

The organisation was spurred on by the Gulf Oil Spill tragedy, seeing the terrible scenes on the television prompted the kids into action. During the crisis the kids spent 4 months giving presentations and collecting supplies from local churches and schools. After this they spent 5 days in the region and worked with the Marine Mammal & Sea Turtle Rescue Center who gladly accepted the collected supplies. After their admirable effort during the gulf spill the kids were asked a tough question as to what they were doing to help the environment? Confused that they hadn’t done enough, they were told about the problems with plastic pollution. After the horror stories of how bad plastic pollution was in our oceans and being told that many of the rescued sea turtles and sea birds would ultimately die from entanglement or from ingesting plastic, the kids devoted their time to educating themselves about plastic pollution and isolated single use plastic bags as the biggest contributor to plastic pollution.

Whilst targeting plastic bags, no sincerity was taken towards the organization from local officials. In Feb of 2011, on Carter’s 10th birthday, they launched the Plastic Awareness Coalition set out to get like minded local organizations to sign on to give the organization more of a voice with local officials. Reaching out to their peers seemed like the best and quickest to spread the message, So in March of 2010, they developed the Plastic Awareness Week curriculum. Partnering with several teachers who helped write the curriculum they set out to test the programme in Olivia and Carter’s school, the programme was a huge success, with everyone learning useful information including ways each student and their families could make subtle changes in their daily lives, which would make a huge impact on the environment.

Since launching the school program, Olivia and Carter have hosted the program to various schools and organizations across the country. Their goal is to get the Plastic Awareness Week curriculum in every elementary school in the US.  The program provides each student with their very own stainless steel water bottle and a cloth reusable bag, which they get to decorate. The programmes success means that over 70 local, national and even international organisations are participating in the coalition and the programme is in the process of having the curriculum set to match national standards for science as well as other areas.  Whilst also working with several organizations in an attempt to have 100% of the funding provided for schools so that the entire program is free.