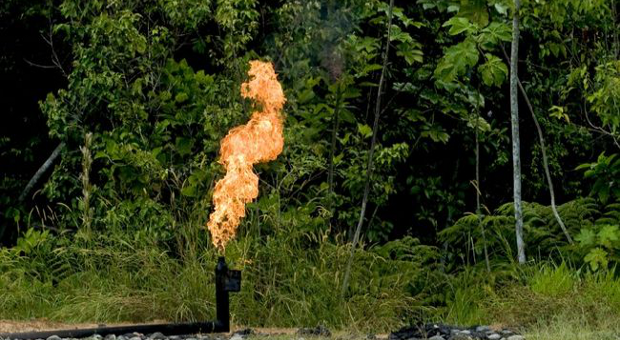 Over the past month there’s been quite a fuss surrounding a video released by Greenpeace as part of their ‘Save the Arctic’ campaign. For those who have not yet come across it, the video is a call for Lego to cut its ties with Shell, cleverly parodying The Lego Movie itself but with a twisted conclusion whereby all is submerged under crude oil – except the Shell logo.

Albeit a little overdramatic – Greenpeace does not disappoint – the video fulfils its role as ignition for debate and brings to mind an array of past oil spill tragedies.

Certain disaster stories are ingrained in our memories, be it through geography lessons at school (Exxon Valdez oil spill in Alaska, 1989) or simply through repeatedly seeing and hearing about them on the news (BP oil spill in the Gulf of Mexico, 2010).

Although we normally associate oil spills with marine environments, severe pollution connected to crude oil extraction can equally devastate terrestrial environments. One such case study which I had encountered but subsequently forgotten about until the Greenpeace video was released is the situation in the Ecuadorian Amazon Rainforest.

A closer look at the rainforest

Blood of the Amazon

Think rainforest and environmental issues – deforestation is almost certainly the first thought to pop into anyone’s head. But take a look at ‘Blood of the Amazon’, a documentary by environmentalist Nicola Peel, and you may find yourself re-evaluating your knowledge of threats to the rainforest, just as I did.

Perhaps (as with Greenpeace) a little sensationalist with her own description of the situation, ‘This is the real Avatar’, the film-maker nevertheless succeeds in raising awareness of the perils of drilling for oil in the Amazon.

Peel originally found herself in the region in order to film endangered pink river dolphins; however, once she discovered the negative impact of oil companies both on the natural environment as well as on local populations and settlements, she decided she had to take action.

In ‘Blood of the Amazon’ she raises awareness of the massive destruction left behind by oil companies, including over 1000 toxic waste pits where, besides oil, radioactive material and heavy metals are dumped. This has resulted in a disproportionately high cancer incidence of up to 80% for some villages, let alone irreversible damage to resident flora and fauna. Water provision is a particular problem for the area as toxic substances seep into the water table and even the rain is polluted by gas flares, rendering filtration vital before it can be used.

Seeing beyond all the doom and gloom, however, Peel’s research in Ecuador has allowed important revelations to be made, such as falsification of the claims that a specific petroleum company was using roadless pipelines thus supposedly causing minimal damage to the rainforest.

Further, she has helped set up the Amazon Mycorenewal Project which employs fungus as a means to break down oil, and has been involved in the Pura Vida project, where waste plastics and rubbish are used as building materials.

Nicola Peel herself carries her own re-usable water bottle wherever she goes, refusing to contribute to the unnecessary waste of plastic.

A severe issue which is to this day still developing is the extraction of oil from Yasuni National Park in Ecuador, argued to be the most biologically diverse region on the planet and designated a biosphere reserve by UNESCO in 1989.

Furthermore, two as of yet uncontacted tribes call the park home. It is estimated that 1/5 of all Ecuador’s oil reserves are located within the National Park, making oil extraction a particularly promising project for economic growth of the country. Following global concern about this action, Ecuador’s government created the Yasuni-ITT initiative: it stated that if the international community were to raise half the value of the oil resources in question by the end of 2011, the oilfields would remain untapped indefinitely.

Too good to be true and despite overwhelming pledges, the requested sum of $100 million was not reached and the plan to stay out of the area was scrapped. Protests and campaigning to protect the National Park continue; however, permits for drilling in the near future have already been signed.

So is the Greenpeace video relevant?

This brings us back round to the Greenpeace video, which given the developments in Ecuador alone, seems not to be too far off with predictions for our future. Greenpeace have questionable means of protesting; nevertheless, their campaign against drilling for oil in the Arctic goes beyond battling it out with Shell.

They are calling for a stop to the normalisation of a ‘toxic brand’ through association with Lego’s ‘halo’ and the dangerous situation where the upcoming generation cannot distinguish between the values of each.

What I will take away from these stories, be they fictional overdramatic representations of our future or documentaries produced with a clear aim of selling villains and damsels in distress to the audience, is how normalised such images have become.

Yes, we’ll reconsider how much waste we produce for a day or two and look up projects we could donate a couple of pounds to – if we’re feeling particularly generous.

But at the end of the day we will most likely continue to lead our protected little lives as we read about environmental sustainability in our air-conditioned artificially-lit rooms, sipping our imported processed coffee.