All that rubbish is why Flight MH370 hasn’t been found 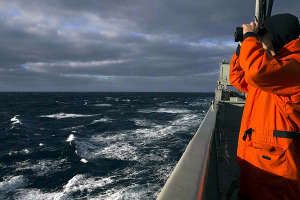 There has been repeated frustration in the search for the missing Malaysian Boeing 777 passenger jet, Flight MH370, and its 239 occupants, that vanished while travelling from Kuala Lumpur to Beijing on March 8 2014. Objects observed from aeroplanes in the latest search area west of Australia have turned out to be no more than rubbish.

Definitely a load of old rubbish

A New Zealander Lockheed P-3 Orion surveillance aeroplane searching for Flight MH370 observed around 70 objects in four hours, and three deemed worthy of further investigation were thought to be a fishing line, an icebox lid and unidentified orange and brown material. Wing Cmdr. Andy Scott explicated, “A lot of the stuff we are seeing is basically rubbish.” This has highlighted the state of the world’s oceans.

Captain Charles Moore, the environmental advocate credited with drawing attention to the Great Pacific Garbage Patch lying between Hawai’i and California, proclaimed that the search for Flight MH370 “will be hampered by untold quantities of debris.” He expounded: “The ocean is like a plastic soup, bulked up with the croutons of these larger items.” There are a further four such rotating sea current systems which bring rubbish to the surface, and the search area for Flight MH370 is on the eastern edge of one in the Indian Ocean.

Moore likened this to “a toilet bowl that swirls but doesn’t flush.” Overall, he gauged there to be 200 million tons of plastic trash in the world’s seas, based on the supposition that 2.5 percent of plastic ends up at sea. Flight MH370 is in there somewhere.

Where the rubbish comes from

It’s cheaper to lose some cargo than to make ships perfectly stormproof, so shipping containers spout trash. Lego pieces are often found on Cornish beaches. In three other episodes, 2,000 computer monitors, thousands of pairs of Nike trainers and 29,000 plastic ducks were released. The containers themselves are a problem because 350 are lost at sea every year, per the World Shipping Council, floating for months, buoyed by the plastic objects within or the air trapped by watertight doors.

The larger items found in these garbage patches are generally plastic and often related to fishing, with nets acting as long-lasting deathtraps for animals. Moore has also found light bulbs, a toilet seat and a refrigerator containing some orange juice.

Trash can also find its way to the ocean if it’s washed along rivers or swept up by tsunamis – the 2011 Tōhoku tsunami in Japan created a sizable patch of garbage in the Pacific Ocean that includes entire houses. 5.5 million pieces of plastic are dumped by passenger and cargo ships every year. Some emanates from industry – usually plastic raw material. Larger objects like cans, bottles and sweet wrappers can be found near built-up areas, but most usually gets washed ashore. A particular concern is the small, omnipresent plastic items associated with everyday life such as shopping bags and bottles. Waves break pieces up.

Denise Hardesty is a research scientist for the Australian science agency, the Commonwealth Scientific and Industrial Research Organisation. Two thirds of the seabirds upon which she performed necropsies had ingested plastic. One contained 175 pieces while another had swallowed a glow stick, used by fishermen to attract fish underwater, that was longer than a finger. Hardesty grieved that four or five hundred years must elapse before many kinds of plastic break down, and until then, pieces just grow smaller. It has been estimated that 93 percent of plastic in the ocean is the size of a grain of rice or less. Plastic can even be found in plankton.

Will things get better?

In 2012, the International Maritime Organization banned the dumping of plastic at sea. This was rather too late for Flight MH370. Eric Galbraith, assistant professor of McGill University’s department of Earth and planetary science, intoned, “But it takes time to change old habits.”