Why yes, money does grow on trees 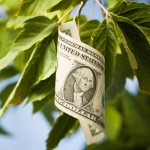 It turns out that money does grow on trees. Researchers in Australia found particles of gold from deposits buried many feet below on the foliage of eucalyptus trees. The roots of eucalyptus trees can penetrate more than 130 feet deep as they seek water. The researchers believe this discovery could offer a new and more ecologically-friendly way to discover gold in locations that are difficult to reach. The research was partly-funded by mining companies and the findings published in the journal, Nature Communications.

Money does grow on trees

Dr Mel Lintern, a geochemist at the Commonwealth Scientific and Industrial Research Organisation, Australia’s national scientific agency, told that easy deposits had been found, with discoveries declining around 45 percent in the last decade, and those that remain are buried many feet beneath sand dunes and river sediments. This body’s research showed that plants were taking in gold.

Eucalyptus trees were studied at gold prospecting sites in the remote Kalgoorlie area of Western Australia and compared with those 2,625 feet away. Others were grown in laboratories, either with or without gold in the soil. About 20 leaves had to be examined to be certain of the presence of gold below. The particles were, on average, around 0.00315 inches wide, about a fifth as wide as a human hair and invisible to the human eye.

Using a synchrotron, a mammoth machine that uses X-rays to probe matter in minute detail, teeny traces of gold were found in the bark, twigs and leaves of eucalyptus trees. Dr Lintern revealed that this had not been expected, and was “quite a ‘eureka’ moment.” Previously, there was much debate over whether gold discovered on trees was wind-blown or transported by tree roots. The study reported that gold is likely toxic to plants, which minimise damage by moving it to their extremities, for instance, leaves, or preferential zones in cells.

The concentration of gold is about 46 parts per billion, and Dr Lintern added that it would require 500 trees growing above a gold deposit to yield enough gold to make a ring. What makes the finding remarkable is that gold found in this manner indicated more significant riches over 100 feet below the ground and could be employed to find gold deposits that wide-area drilling tests overlooked.

Dr Lintern explained that trees were acting as a hydraulic pump, transferring gold from the ground to their foliage. At present, expensive exploratory drilling is required to locate gold, but analysing vegetation could be more economical. With gold costing USD1,345/GBP831/EUR977 an ounce, the benefits are evident.

The study stated that trees’ ability to find gold has been little-reported, and this discovery was the first ever of its kind. Eucalyptus trees are so common in Australia, the second-largest producer of gold in the world after China, that the technique could be widely-applied. Gold has also been found in other trees, such as the acacia mulga, and shrubs.

Other minerals such as copper, iron, lead and zinc could also be found this way. Prior to his retirement, Nigel Radford devoted his entire working life to mineral exploration, ending up as a geochemist for the US company, Newport Mining, one of the world’s leading gold producers. He said on ABC radio that this realisation was “very, very important for the future of mineral exploration.”