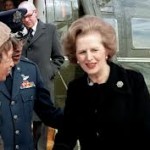 Since the announcement of the death on Monday 8th April of former Prime Minister Margaret Thatcher (latterly Baroness Thatcher of Kesteven), the British media has been awash with tributes to, and retrospective critiques of, her record as the longest serving United Kingdom Prime Minister of the 20th Century

Whilst most of the coverage has focussed on the legacy of her economic and industrial policies including such milestones as the privatisation of many State-owned companies such as British Telecom and the long-running and bitterly divisive strikes in the mining and printing industries, little consideration has been given to Thatcher the Environmentalist.

As a trained scientist – she studied Chemistry at Oxford University and worked as an industrial chemist before entering politics – Mrs Thatcher was probably better equipped intellectually than any subsequent Prime Minister to fully grasp the fundamental science behind climate change and other contemporary environmental issues.

Although such issues did not start to be widely discussed and debated outside academic circles until the 1990s, Margaret Thatcher delivered a speech to the Royal Society in 1988 that touched on the dangers of greenhouse gas emissions, the hole in the ozone layer that had recently been discovered over the Antarctic and acid deposition from power stations and industry

This address to a British learned society, which could possibly have been dismissed as the Prime Minister, as a Fellow of the Royal Society, seeking to demonstrate her scientific credentials to her peers, was followed in 1989 by a speech to the United Nations General Assembly that contained the lines:

“The result [of human impacts on the environment] is that change in future is likely to be more fundamental and more widespread than anything we have known hitherto. Change to the sea around us, change to the atmosphere above, leading in turn to change in the world’s climate, which could alter the way we live in the most fundamental way of all.”

The fact that we may be surprised to hear such sentiments being articulated by a politician who is viewed as a champion of the Right demonstrates the extent to which the issue of climate change has become dominated by political, as opposed to scientific, considerations. Ultimately, it would seem that Thatcher could not bring herself to embrace the type of trans-national policies that are required to tackle global environmental challenges, especially when these involved challenging the hegemony of free market economics.

In her 2003 book Statecraft, Thatcher criticised the “alarmist” pronouncements of the Intergovernmental Panel on Climate Change (IPCC) and warned that “the new dogma about climate change has swept through the left-of-centre governing classes.”

A further statement appears to foreshadow the approach of the current UK Government that action on the environment must not be allowed to derail economic growth. “Whatever international action we agree upon to deal with environmental problems, we must enable our economies to grow and develop, because without growth you cannot generate the wealth required to pay for the protection of the environment.” One can almost imagine current Chancellor George Osborne uttering these words in support of his assertion that “We’re not going to save the planet by putting our country out of business”.

At the end of the day it seems that the concerns of Margaret Thatcher the scientist were over-ruled by Prime Minister Thatcher the free market ideologue. With all the current debate surrounding her legacy, it is salutary to speculate what it might have been had those late 1980s speeches been translated into concrete policy prescriptions. Mrs Thatcher Saves the Planet?