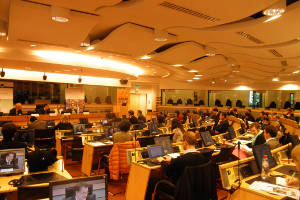 While high-level politicians and heads of state keep guarding their belongings, the low carbon revolution has already begun and is taking up speed. “The high speed mitigation train” called for by Rachendra Pachauri, chair of the highest scientific panel on climate change, the IPCC, earlier this year is a grassroots movement embracing all parts of society, outpacing the mighty sceptics. (image: by courtesy of ERRIN & Climate-KIC (Marco Canton)

On World Environment Day, 5 June 2014, during the Green Week 2014 the European Commission’s Committee of the Regions invited to a high level round table on transition cities moving to a low carbon economy. Climate-KIC and ERRIN jointly organized the event.

Climate-KIC was launched in 2010 and kicks off innovation on mitigation and adaptation by bringing together leading players from cities and regions. The European Regions Research and Innovation Network (ERRIN) complements this effort perfectly. Moderator Jon Bloomfield, Co-Chair of the Making Transitions Happen platform at Climate-KIC states in his introductory remarks: “We need a broad range of activities and stakeholders to bring low carbon innovation and action forward in urban development if Europe is to meet the ambitious climate targets for 2020 and 2050. The engagement of the European Commission’s Directorates General on Regional Development, Energy and Climate Action are vital for success, together with the many diverse, highly motivated local and regional stakeholders.”

The 37 Billion Euros allocated on low carbon economy in the EU Member States today shows that decision-makers put a priority on low carbon economy. Juan Perez Lorenzo, Policy Officer on Adaptation, DG CLIMA: “Urban adaptation is also highlighted in the mid-June call for proposals of the LIFE+ programme for the period 2014 to 2017.” Public funding alone will not suffice, but can leverage private finance four- to eightfold the amount spent. Leveraging private funding requires a range of financial instruments that authorities either need to develop, or to copy from good examples around the world.

The invited city representatives from the cities of Frankfurt, Modena, Budapest, Helsinki and Valencia present successful approaches, comprising an integrative stakeholder process in Frankfurt, a revolving energy fund in Modena, Helsinki-Uusima region’s carbon neutrality target for 2050, Budapest’s bike scheme and Valencia’s sustainable urban mobility plan. All representatives stress the significance of the exchange with other cities and the mutual support via the growing network of local and regional climate players. Existing networks and initiatives and Climate-KICs twinning programmes all help to support the fruitful endeavours, and this game has win-win-potential: The newly launched Mayors Adapt developed by the Commission works closely with the Covenant of the Mayors, the Climate Alliance, ICLEI and Climate-ADAPT. All cities and municipalities are equally important, and none should be left behind. 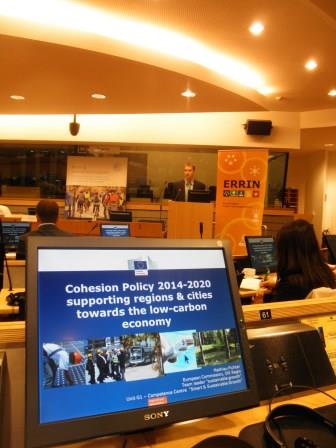 Pedro Ballesteros Torres, DG Energy, EU-China Urbanisation Partnership, EC makes it clear that the recipe for 21st century policy is the opposite of a simple top-down approach. But: “We need to work with the people of the cities, not only with their ambassadors, and create space for cities to develop low carbon technologies and policies together with their citizens, aligned with socially acceptable development.” The UNFCCC process of endless climate negotiations is a failure, according to Torres. This negotiation game is not cooperative, but competitive by definition. No one is willing to give up their power. On the contrary, the 21st century is marked by networks and decentralised, local initiatives. “Our major hope for low-carbon development drivers in the world lies in cities. At COP 21 in Paris, December 2015 it will be a good occasion for cities to get together and commit on meaningful action. Cities might be the most likely ones to provide solutions for tackling climate change.”

Rapporteur Aled Thomas, RIC-Director, Climate-KIC wraps the session up ending with a call for united action: “We will mobilize our partner organisations over the next 18 months until COP 21, and we will collaborate with many other parties.”

That way, there is still a gleam of hope for the high speed mitigation & adaptation train to accelerate from slow to fast motion!

For presentations and further information, please visit: Climate-KIC and ERRIN or subscribe to the Making Transitions Happen Quarterly Newsletter

This article was co-authored by Katrin Heeren and Stuart Bowles