Sustainability is the ideology interlinking social, economic and environmental pillars with the goal of reducing climate change and improving the health of our one planet and its people. It seeks to create a global structure that promotes equitable growth and benefits while appreciating these pillars are intrinsically connected and that they need to be provided with long-term stability and resource availability. The three R’s have become one such principle geared at attempting to serve as a building block towards a more sustainable tomorrow.

The concepts of reduce, reuse, recycle is tied in with waste, what we waste and what we do with it. It forms the top 3 crucial blocks of the Waste Management Pyramid.

In many countries waste is disposed of and taken to landfill, sorting sites and/or potentially incinerated. Some municipal services, in countries such as England and Sweden, provide recycling facilities whilst others such as Indonesia do not. It is important to note that even though a country recycles, its products might not be recycled locally and that a county that does not provide communal or residential recycling facilities will still recycle.

The remainder of this waste termed ‘residual waste’ can be considered to still be a source of energy. This has lead to ongoing debate about how to gain value from this energy by converting it into heat and/or electricity. Incineration has been a common waste removal practice in many third and first world countries but generating electricity from incineration and landfill via biogas are gaining traction. 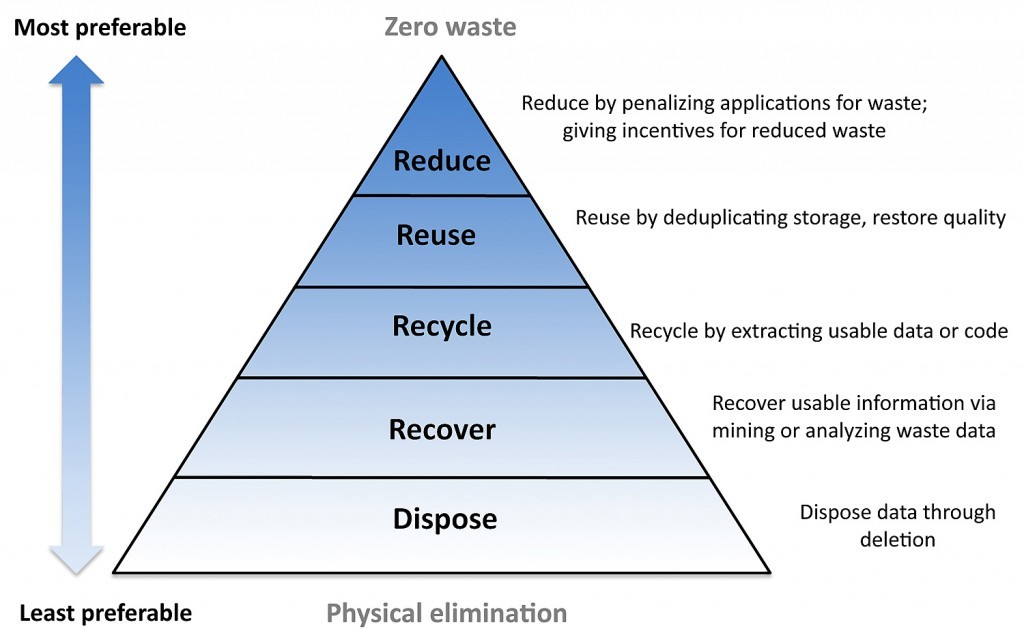 Speaking for both options, a major concern is that by placing economic value on waste, it will detract efforts away from recycling and may even end up as a competitor. Waste infrastructure is also highly costly to implement and needs to be there for the long term to make it financially viable. This requirement for long term feasibility is likely to cause problem for future technologies that may be more viable and efficient as investment in it may push people to try and maintain it as a totem of power and heat generation. A report published on behalf of the Mayor of London has suggested that the cost of building an incinerator ranges anywhere from £45 to 76 million depending on capacity and whether it is a combined heat and electricity generator or solely for electricity generation. These facilities can have an output of up to 12MW but with an efficiency of up to 35%. Other sources have suggested that the costs of these facilities can be between $150 to $230 million for large-scale facilities in Europe. Waste to Energy has become a big business with economic potential in 2012 being valued at $24 billion with an estimated increase to $29 billion by 2015.

Incineration could be a golden egg but there is a lot of controversy surrounding it. As mentioned, moving focus away from recycling is a significant one but so is its inability to remove or reduce greenhouse gases (GHG), especially as waste is something that generates its own CH4 supply, which is often credited as a GHG that is 25 times more potent then CO2. Incineration also results in flue gas and residual ash that can be highly toxic and difficult to decompose of. Ultra-fine particles including polychlorinated byphenols (PCB’s), dioxins and furans have been known to get past incinerators flue gas filtration system, which are believed to be carcinogenic and have been known to bioaccumulate. In the UK the emissions of residual flue gases has reduced by 10% over the last 25 years and it is noted the air pollution contribution to health that result from incinerators is low.

Incinerators generate more CO2 per unit of energy then other more conventional methods (2988 versus 2249lbs/MWh). Studies have gone as far to show that financial gain versus associated health risks are not worth it. How can a process that generates GHG be a green technology?

Denmark has an incinerator in every city and this contributes to 5% of the countries electricity generation. These are majority public owned units that provide both heat and electricity for the local residents. This has massively reduced their recycling targets, which can be as low as 22% as household waste is not separated, and placed great emphasize on the denizens to maintain a high waste stream (This country presently burn 80% of its waste which is more then Poland generates).

This is the perfect example of how the movement towards incinerations can derail recycling, even more so as Denmark realizes now that they need to recycle more as they have set themselves the goal of being fossil fuel power free by 2050.