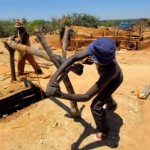 The headline grabbing violence at the Lonmin-owned Marikana mine in 2012 warned multinationals that labour rights are a serious, and sometimes deadly, issue. The Marikana Massacre, as it was dubbed by the media, left 34 people dead and 78 injured after a confrontation over pay and working conditions. It demonstrated the potential that labour rights issues have to cause serious reputational damage and legal problems for companies. A new briefing from the Business and Human Rights Resource Centre (BHRRC) examines this, looking at companies’ impacts on the right to freedom of association. This right is defined by the UN’s International Labour Organisation as workers’ “right to join organisations of their own choosing without previous authorisation”. It is protected under a range of international instruments, including the Universal Declaration of Human Rights.

The briefing is sobering reading. In 2009-2011, 267 trade unionists were killed globally – and these are the recorded killings only. In 2012, 20 unionists were killed in Colombia alone. Companies have found themselves embroiled in such killings: charges of corporate complicity have been brought against Nestlé, BP and Coca-Cola. The UN Guiding Principles on Business and Human Rights have put the onus on companies by establishing the corporate responsibility to respect workers’ rights in business relationships. This means that companies must be diligent when operating with new partners or in countries with different legal regimes that may not respect those rights. The new briefing also gives data on the response rates of companies that have been subject to civil society concerns about labour rights violations, and have consequently been asked to make a statement. Many have done well, responding to all or most of the enquiries made by the BHRRC. However, it is notable that Apple has failed to respond to any at all. For a company that has come under considerable and consistent fire for alleged human rights violations, this is an odd CSR strategy.

It’s not all bad news: the briefing also documents some positive moves. International Framework Agreements (IFAs) have been entered into by many companies recently, including Siemens, Ford and Saab. IFAs are agreements between multinationals and global union federations (bodies composed of regional and national trade unions focusing on a specific sector). Broadly, the agreements establish that there will be ongoing dialogue between the parties and that the company will respect the same standards in all the countries in which it operates. These statements send a positive signal to legal regimes that may not protect workers’ rights but where companies have operations or investments. Another positive development has seen six US textile and clothing companies take a more direct approach to improve the policy environment in Peru. The companies, which include Nike and New Balance, have called on the Peruvian government to repeal a law that may encourage labour rights violations.

This is the glimmer of hope after the roll-call of shocking statistics: the spread of operations and investments through globalisation may also mean the spread of safer, fairer working environments across the world.